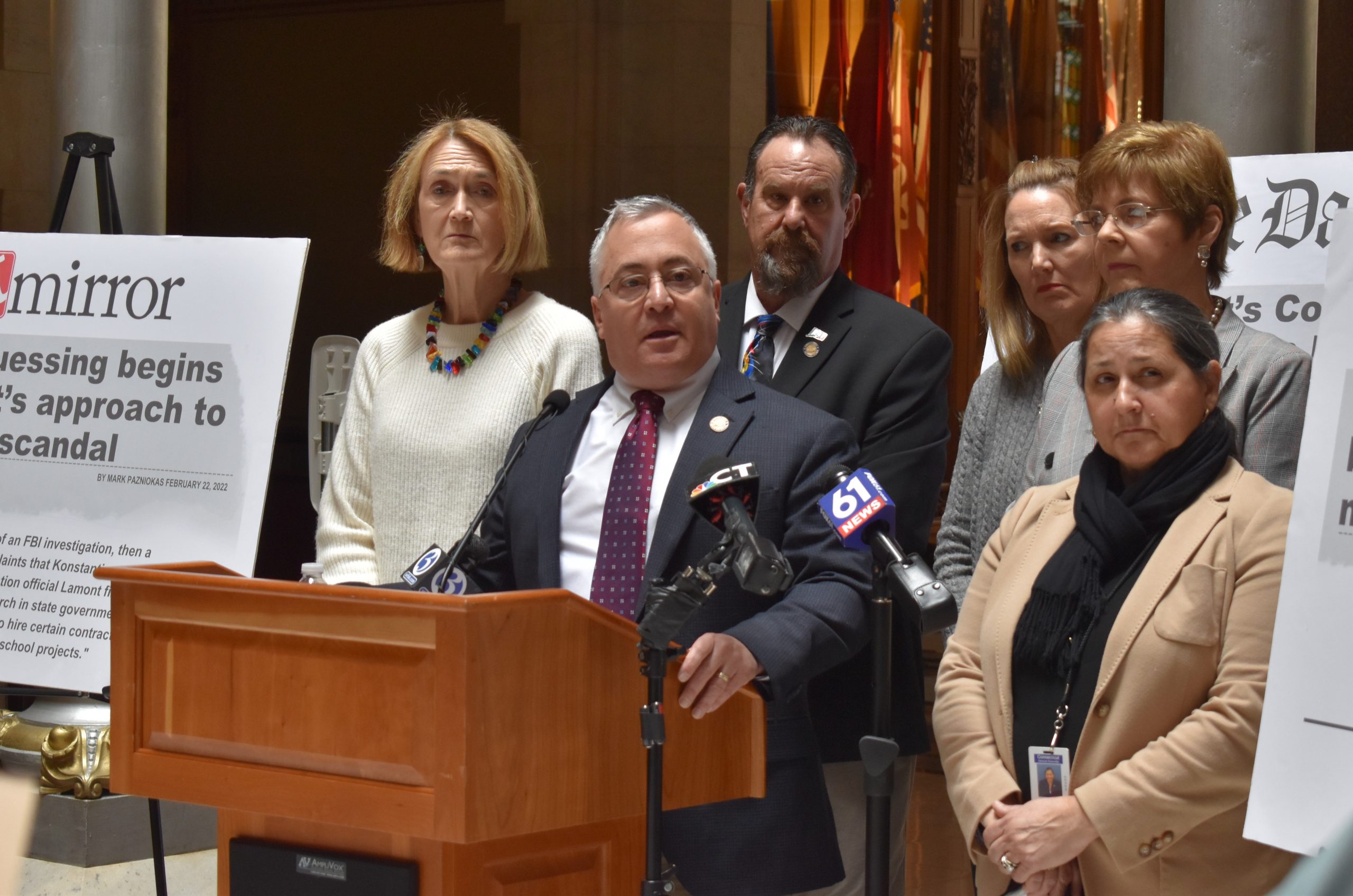 “Today, I stood with some of my colleagues from the House Republican Caucus to call on Democrats to launch a formal inquiry into the controversial school construction bidding scandal that is focused on members within the Lamont Administration. Connecticut residents have the right to know where their tax dollars are going and what is going on at every level of their government.

“Daily headlines emerging from the capitol are alarming, and there’s little doubt that residents’ trust in state government is being tested as the news media digs deeper into layers of no-bid contracts, the school construction bidding process, alleged nepotism, and even one former legislator’s alleged misuse of federal pandemic funds,” House Republican Leader Vincent Candelora and Senate Republican Leader Kevin Kelly said. “The ball is in the court of Democrats who control this building. They must decide if what the media is uncovering—particularly about school construction—is troubling enough to start asking the governor’s administration questions in a formal setting. We believe firmly that it is, not only because of the connection this issue has to the work the legislature performs, but to protect the sanctity of the General Assembly and our relationship with the citizens who send us here with the understanding that we’ll act in their best interest.”

Republicans urged the House Speaker and Senate President to exercise the General Assembly’s investigatory power granted through state statute (CGS sec. 2-46), saying that when lawmakers return to Hartford March 2nd to consider other business, Democrat leadership should put up for vote a resolution creating an official investigatory panel to examine the state’s school construction funding program.

“We know from many media reports that the FBI has turned an eye toward some of the actions tied to this governor’s administration, and while those federal investigators determine whether criminal activity has transpired, it’s incumbent upon our body—the legislature—to figure out whether bond money and other taxpayer dollars have been handled properly in the school construction process,” Candelora and Kelly said.

Candelora and Kelly said the legislature’s broad investigatory reach includes authority to subpoena witnesses and documents (OLR 200-R-0249, Op. Atty. Gen. No. 84-130), and the power to prosecute witnesses that fail to testify when summoned (CGS sec. 2-48). Additionally, the legislature can delegate its investigative power to either a standing committee or a specially created committee.

“There’s ample precedent for this type of legislative investigation, whether the Transportation Committee examining the award of an emissions testing contract, a special legislative committee inquiry into State Police investigative techniques, or even the Energy Committee investigating the state’s petroleum industry,” Candelora and Kelly said. “With more than $1 billion in bonding approved by the legislature for school projects since 2018, a review of what’s transpired in that sphere alone should be prioritized—it’s a topic that affects communities represented by both Republicans and Democrats. For our colleagues to fail to examine what’s unfolding before their eyes would be viewed by many Connecticut residents not just as a dereliction of duty, but as a political effort to protect an under-fire governor to whom they’ve provided an unprecedented amount of power over the last two years.”