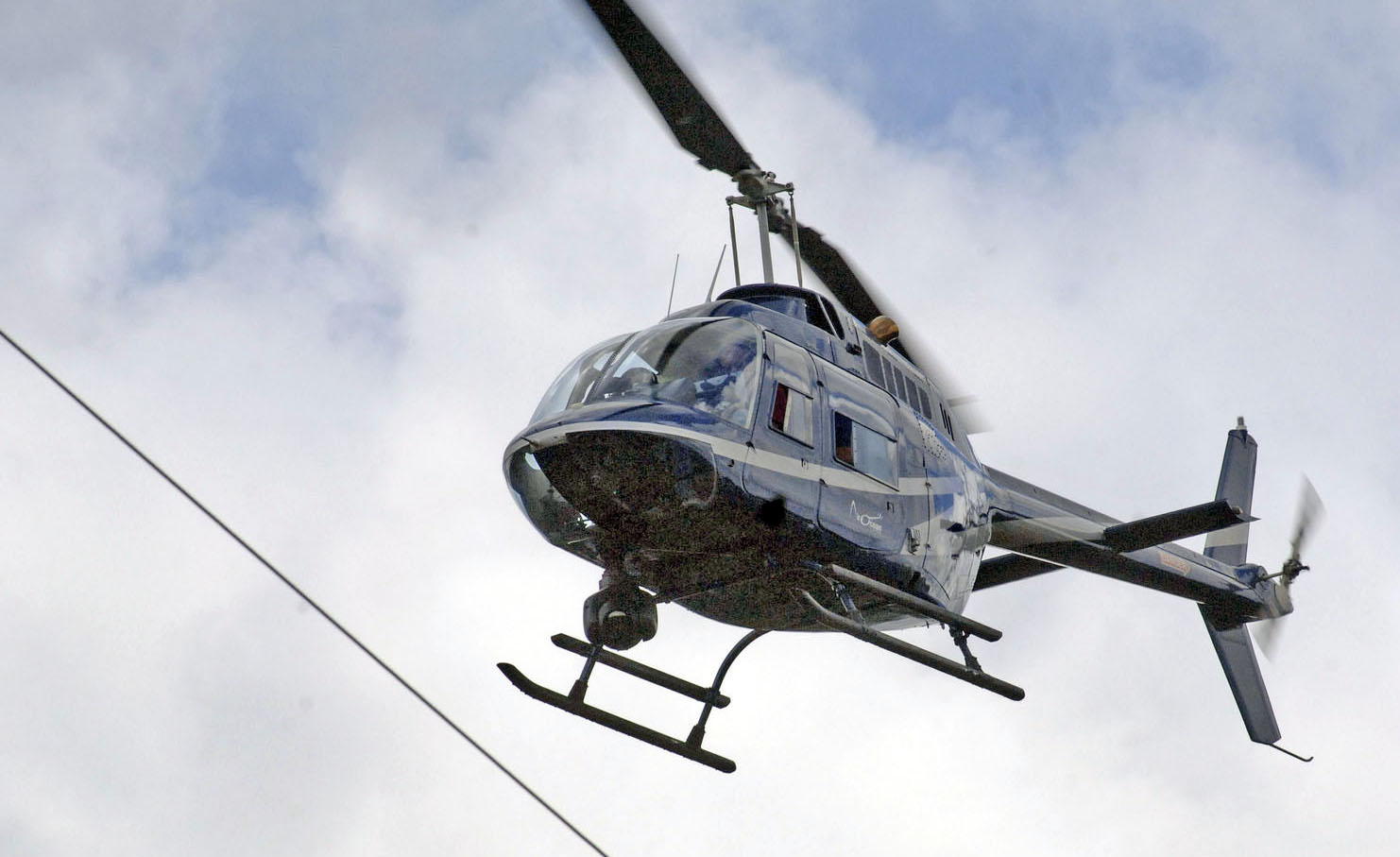 Eversource is currently conducting aerial inspections of high-voltage electrical equipment on rights of way throughout Connecticut, including in Brookfield, Bethel, and Danbury.

This semiannual inspection enables Eversource to continue providing reliable electric service to our area. The work involves the use of a helicopter equipped with heat-sensing, infrared scanning technology which can detect potential equipment issues before they occur.

The aerial inspections start today and continue through…

END_OF_DOCUMENT_TOKEN_TO_BE_REPLACED 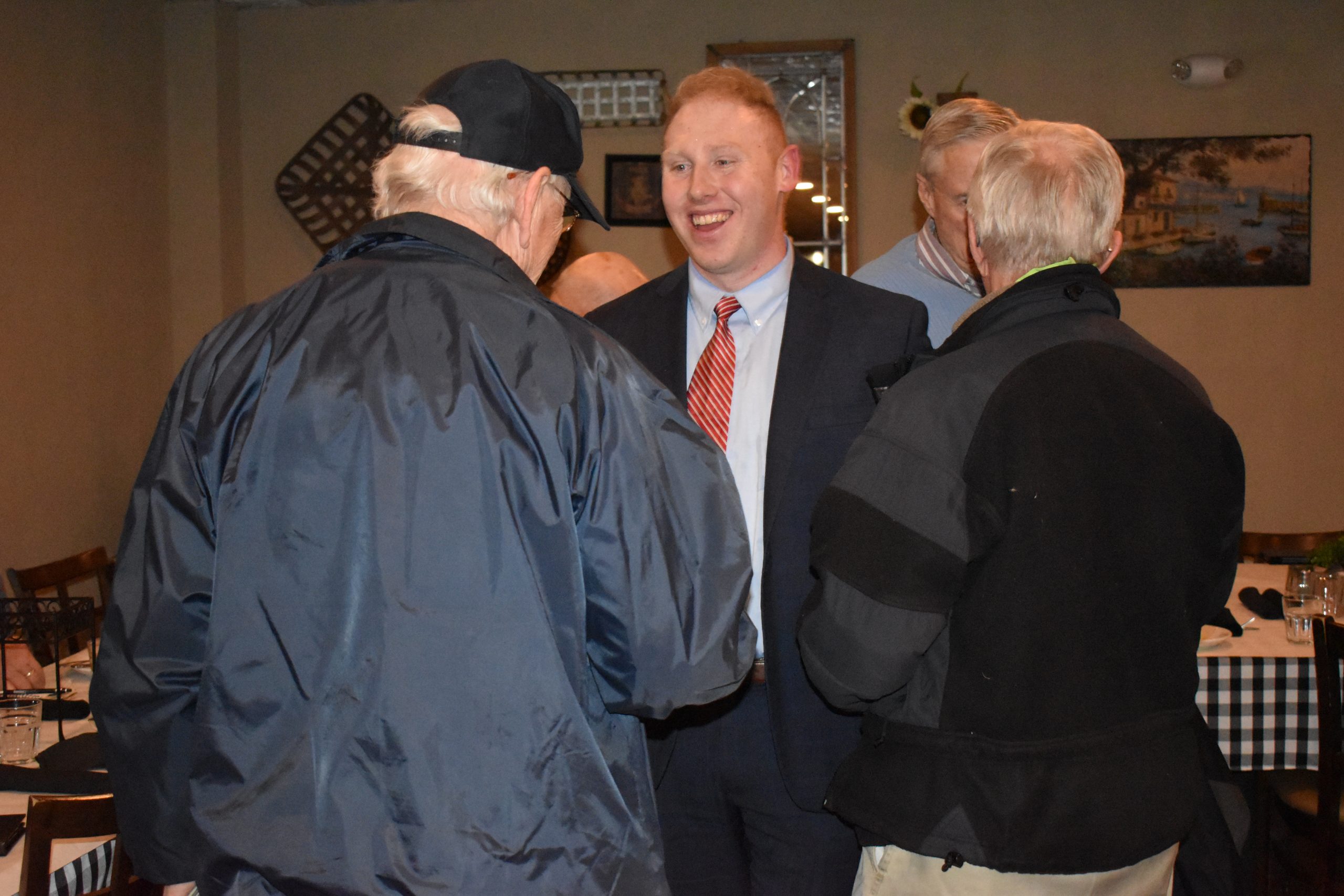 BROOKFIELD – State Rep. Stephen Harding (R-107) last Thursday hosted a “Pizza and Politics” event at John’s Best Pizza and Restaurant in Brookfield in preparation for the 2020 legislative session, which convened on February 5th.

At the event, Rep. Harding fielded thoughts and questions from constituents on a range of major issues the legislature is expected to debate this year, including problems with the state’s transportation infrastructure and the cost of living in Connecticut. Also of concern…

END_OF_DOCUMENT_TOKEN_TO_BE_REPLACED 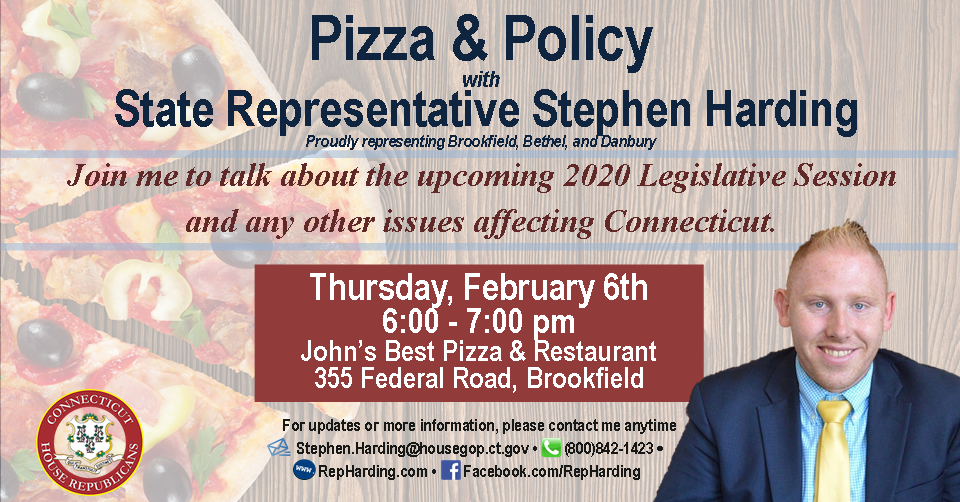 BROOKFIELD – State Representative Stephen Harding (R-107) invites constituents to meet him for pizza and conversation regarding the upcoming 2020 Legislative Session, which convenes February 5th. Rep. Harding is looking forward to answering your questions and hearing your concerns regarding state government and its impacts on the 107th district.

This event is free and open…

END_OF_DOCUMENT_TOKEN_TO_BE_REPLACED

Public Hearing on Tolls — How to Testify

Public speaker order will be determined by a lottery system. Lottery numbers will be drawn from 9:30am to 11:30am in Room 2300 of the LOB.

Please submit 55 copies of written testimony to Committee staff at the time of the lottery in Room 2300 of the LOB. Testimony received after the designated time may not be distributed until after the hearing. Speakers arriving after the completion…

END_OF_DOCUMENT_TOKEN_TO_BE_REPLACED 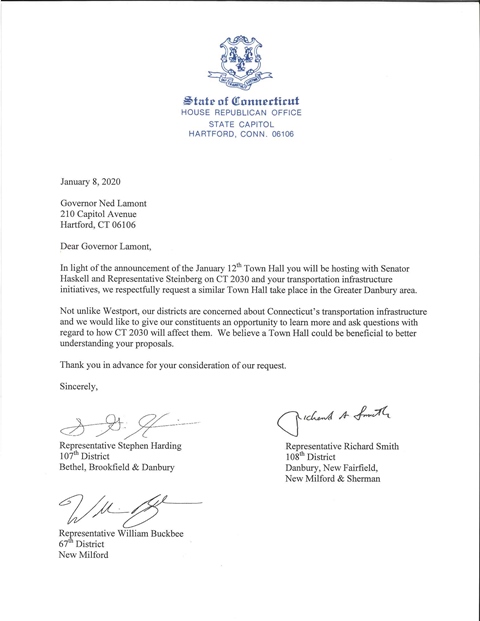 HARTFORD – Danbury Area legislators have sent a formal request to the governor’s office to call for a “Town Hall” meeting regarding his administration’s CT2030 transportation plan. State Representatives Stephen Harding (R-107), Bill Buckbee (R-67), and Rich Smith (R-108) penned a letter to Governor Lamont on Tuesday, January 8, asking that a local Town Hall meeting be held so that Danbury area residents could have an opportunity to hear details of the plan and express their concerns or ask questions.

END_OF_DOCUMENT_TOKEN_TO_BE_REPLACED 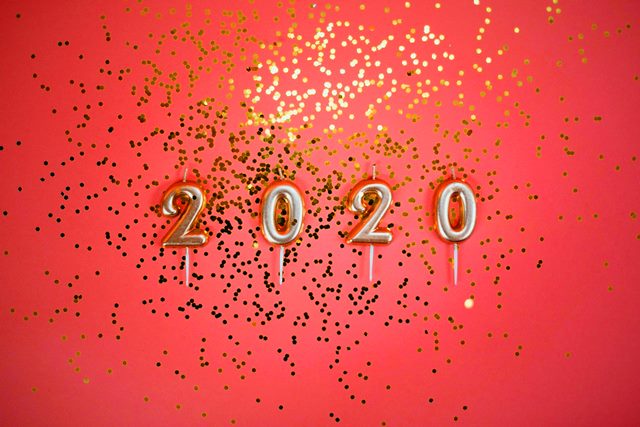 I want to wish you and your families a safe and Happy New Year! With 2019 coming to an end, you should be aware of new taxes and laws that will be going into effect on January 1, 2020.

These new taxes, which I opposed when they came up for debate earlier in the year, include:

END_OF_DOCUMENT_TOKEN_TO_BE_REPLACED

Rep. Harding to Ring Bell for Salvation Army for yet another Holiday Season 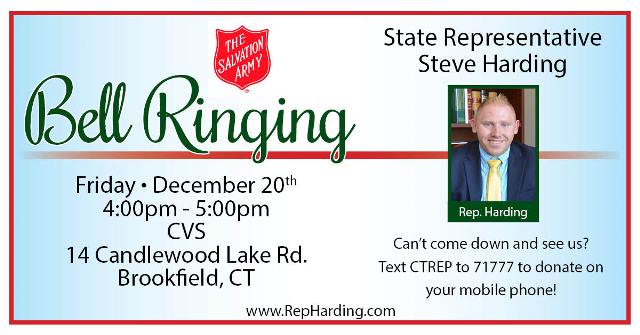 BROOKFIELD – State Representative Stephen Harding (R-107) will be volunteering to raise money for local residents in need by collecting for the Salvation Army at the Brookfield CVS on December 20th. All proceeds collected during the one hour of bell ringing will be donated directly to the Salvation Army.

Rep. Harding welcomes all constituents to stop by the store and help make this fundraising…

END_OF_DOCUMENT_TOKEN_TO_BE_REPLACED 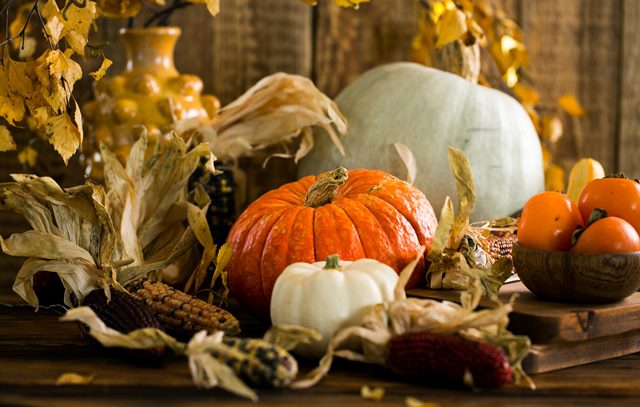 I would like to take a moment to wish you and your family a happy and peaceful Thanksgiving. For me, this was always a weekend of family, food and fellowship. It is my hope that you will also be able to celebrate this uniquely American holiday with family and friends by your side/ and give thanks for all the gifts we have been blessed with this year.

Also, if you are planning to start shopping for holiday gifts this weekend, please try to stay local this season and support our small businesses. Saturday, November 30th is the tenth annual nationwide Small Business Saturday. This day is meant to bring attention to the important movement towards small businesses and to support entrepreneurs in our communities. We have a number of great shops and restaurants across Southwestern Connecticut that you can visit.

END_OF_DOCUMENT_TOKEN_TO_BE_REPLACED 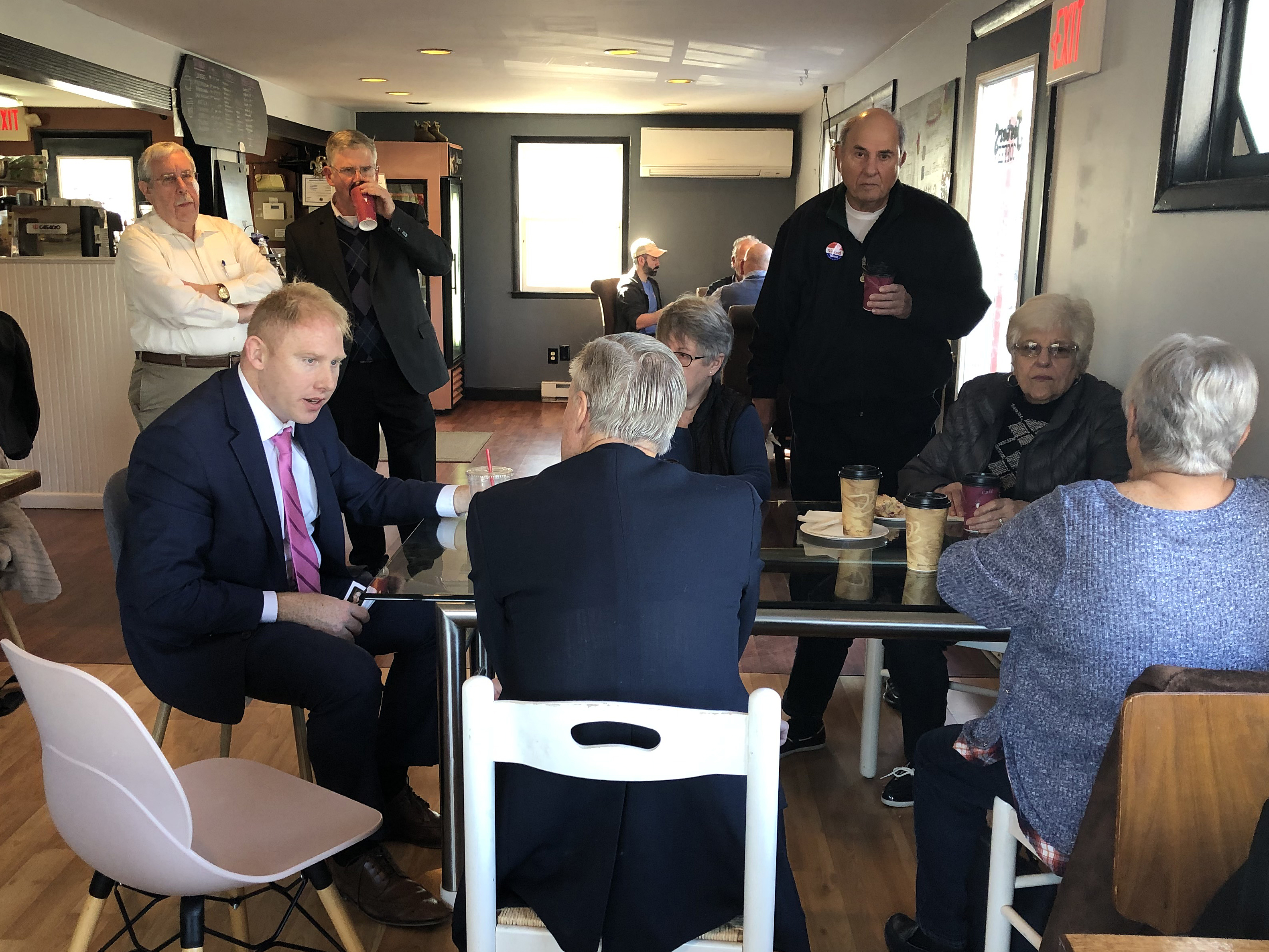 BROOKFIELD –State Representative Stephen Harding (R-107) hosted a “Coffee and Conversation” event yesterday morning at Jester’s Coffee in Brookfield to discuss current topics of importance in the district and across the state, including tolls and the Special Transportation Fund, the Rainy Day Fund, and 8-30g affordable housing.

“It was a great opportunity to meet and have an informal discussion with my fellow neighbors in the 107th district,” said Rep. Harding. “It was evident from our conversation…

END_OF_DOCUMENT_TOKEN_TO_BE_REPLACED 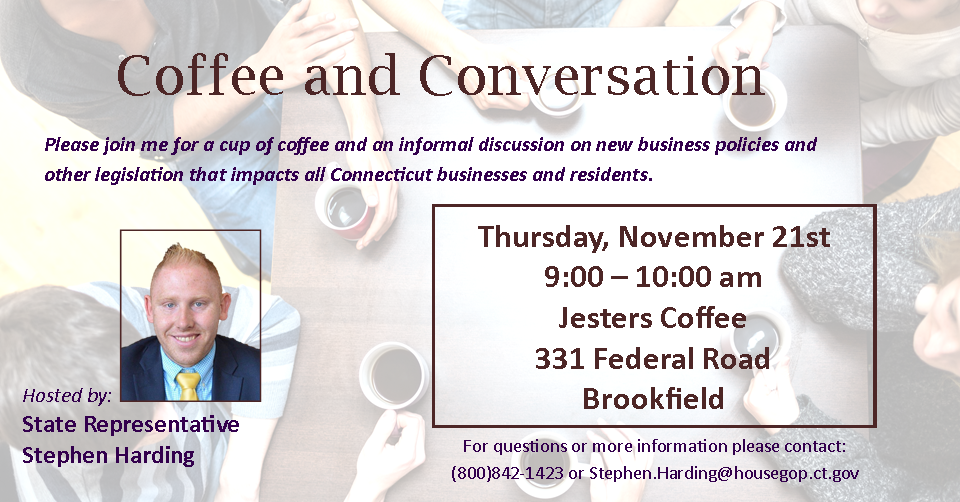 BROOKFIELD – The 2019 legislative session is proving to be one of most impactful times on the state’s business community in recent years, especially considering the new taxes that went into effect October 1st. Members of the state’s business community and small to mid-sized businesses, in particular, are therefore critical players in the effort to turn around Connecticut’s economy.

With that in mind, State Representative Stephen Harding (R-107) is hosting an informal “Coffee and Conversation” event…