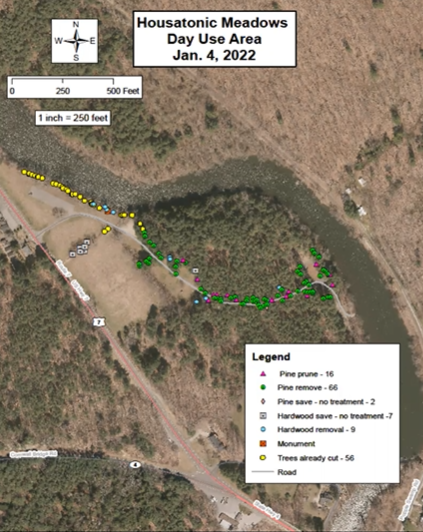 DEEP and/or one of its contractors began this high-volume hazard tree removal beginning on or about November 12, absent any public notice, stakeholder outreach or public hearing. Responding to significant concern expressed by residents, Senator Miner studied the area and requested all communications pertaining to this project in November 2021.

Since then, DEEP paused its hazard tree removal, provided Senator Miner with some related documents and agreed to hold a virtual public hearing that was at his request. During that public hearing, DEEP Deputy Commissioner Mason Trumble accepted responsibility on behalf of the agency for its lack of transparency and a process that needed significant improvement. He also made clear DEEP’s intention to proceed with the hazard tree removals prior to other testimony in the hearing process. In a telephone conversation, Deputy Commissioner Trumble stated that DEEP would likely resume the tree removal process at Housatonic Meadows this week.

“It is now clear that DEEP had no intention of considering any of the testimony offered by highly- qualified, equally-credentialled members of the public in light of its plans to resume hazard tree removal. They have no plan for replanting, bank stabilization, damage mitigation to endangered species in the area and no plan to mitigate damage and disruption in the area. While DEEP officials did their best to feign contrition, the thoughtful testimony of experts and stakeholders at last week’s hearing did not receive a frog’s-lick worth of consideration,” said Senator Miner.

“I made it clear through my FOIA request when this issue arose in November that DEEP’s current hazard tree management process is a sham, which does not consider negative impact to endangered species and other important wildlife, significant or historical trees, the public and certainly not local and statewide stakeholders.

“Commissioner Dykes, having participated in a number of Zoom conference calls with some area stakeholders and me, could have avoided this public embarrassment had the process been handled in a more credible fashion. During one of those convened discussions, she described an internal investigation about this situation. Representative Harding and I will be requesting that the Chairs of the Environment Committee convene an informational hearing on this information upon its release.

“It is necessary to specify that this be done in a reasonable timeframe as I still await a response to my follow-up request under FOIA from DEEP attorneys. Specifically, this request seeks to identify communication gaps that led to a significant lapse in communication between DEEP and the public from this past spring through the fall. I’d like to think that this was a DEEP oversight and not an indirect means of nondisclosure to the public regarding this project.

“My aim this year is to offer legislation that will inform this process of hazard tree removal going forward absent some disaster declaration from a Governor,” he said.

Rep. Harding said, “I was shocked and disappointed when Senator Miner alerted me to the seemingly arbitrary tree removal at Housatonic Meadows by DEEP this fall. I’m in complete agreement that this removal has been mishandled and unwarranted.

“This park represents so much of the natural beauty that embodies our State, particularly in the northwest corner. It is absolutely critical that the Environment Committee stand steadfast in protecting the habitat of these natural resources. Therefore, I stand with Senator Miner in calling on the Chairs of this Committee to convene an informational hearing, in order to access all of the necessary information from DEEP in this matter. This information will be instrumental in assisting Senator Miner and I in crafting necessary legislation to ensure that an episode such as this never happens again in Connecticut.”