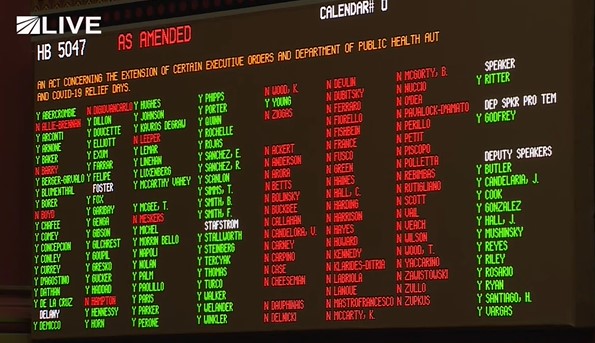 During a House Session on February 10th, State Representative Robin Green (R-55) voted against extending the civil preparedness and public health emergencies, and the extension of executive orders issued by Governor Lamont.

The first item, HJ 1 ‘Resolution Declaring the Continuation of the Public Health and Civil Preparedness Emergencies in the State,’ renewed the state of emergency until June 30th. Connecticut has been governed under a state of emergency since March 10, 2020 when Governor Lamont first issued the declarations.

“There is no longer a need for what would be the seventh extension of the governor’s emergency executive powers. We are no longer in a state of emergency and must be able to function as we did prior to the pandemic,” said Rep. Green. “We have to get back to how things were and takes steps towards ending this emergency.”

The resolution was passed by 89-56 with 3 Democrats joining Republicans in opposition.

The second bill, HB 5047 ‘An Act Concerning the Extension of Certain Executive Orders and Department of Public Health Authority and Covid-19 Relief Days,’ extended a number of orders that were set to expire for the duration of the civil preparedness and public health emergencies.

“Throughout this entire pandemic, it has been children that have endured the most changes and restrictions, yet they are also the population that is proven to be the least susceptible to being physically impacted,” Rep. Green said. “Schools were shuttered abruptly, children were forced to shift immediately to virtual learning, and then had to learn in isolation. In addition, it’s now been about two years that our children have been masked in schools all day long. Parents have continued to express the challenges their children face with being masked, and how their children are suffering, but their voices have not been heard. I voted no to extending the mask mandate on school children any longer because I stand with parents and believe they should have decision-making authority over their own children. Those who want to mask their children should have that choice, but no child should be forced into wearing a mask. We must return the parental right and parental choice to those who know what is best for their child – parents,” added Rep. Green, a member of the legislature’s committee on children.

Republicans offered amendments on the bill; one would have allowed parental choice regarding school mask mandates. Ultimately, the bill was passed by 86-62 with 9 Democrats joining Republicans in opposition.

Both the HJ 1 and HB 5047 await action in the State Senate. Both bills can be tracked on the General Assembly website at www.cga.ct.gov.

Anyone with questions, comments or concerns pertaining to state government, may contact Rep. Green at Robin.Green@cga.ct.gov, or by calling (800) 842-1423. You can also follow my legislative activity by visiting www.repgreen.com, or by connecting with me on Facebook at https://www.facebook.com/repgreen55th.