Representing Ridgefield Since 1776 – The legislative history of our State Representatives

After proudly taking her late husband‘s place representing the 111th district, Mary Keeler was a State Representative who never cast a vote and never had the opportunity to advance Ridgefield’s agenda. Her tenure, while brief, put her in the same rarified company as Capt. Aaron Lee, Major Job Smith, Capt. Nathan Dauchy, former Governor Phineas Lounsbury and many other Ridgefielders who chose to serve the people of Ridgefield in the legislature.

They are but a few examples of the legacy of local figures that have served the town over the past two centuries. Since 1776, 176 Ridgefielders from all walks of life have stepped forward to make a difference. Their tenure ranged from several months to the current and longest serving Representative John Frey’s 21 years in office.  Many of their stories have gone largely unnoticed until now.

“The story of Ridgefield is the story of Connecticut and I am pleased this information is being brought to light, and that it will be archived and shared for decades to come,” said Rep. John Frey.

Two years ago, after receiving an inquiry from the Ridgefield Historical Society, Rep. Frey tasked his Ridgefield High School interns Petros Papadopoulos and Nicholas Patterson to compile a list of all Ridgefield’s representatives since 1776. After tireless effort, they identified Ridgefield legislators dating to the founding of our nation.  This year, with the help of House Clerk Ann Clark and resources from the legislative library, interns Alec Pool, Chris Flynn, and Miles Tullo completed the project. They compiled the list using Ridgefield’s vital records, church documents and legislative manuals that tell the story of the town from a legislative perspective.

“What we found during our research was pretty remarkable,” Christopher Flynn said. “There was disparate information about death dates, addresses, and political affiliations that revealed scores of stories about our founders and their service to the state. This project brought some of Ridgefield’s storied history to life.”

One of those stories regards Ridgefield’s first state representative, Philip Burr Bradley. During the late 18th century, Bradley served as both a State Representative and as a Colonel with the 5th Connecticut Regiment of the Continental Line during the Revolutionary War. While Bradley’s military service earned him the respect of figures like George Washington, his legislative work had an equally important impact, being one of the delegates to sign the US Constitution.

Nearly a century later in 1901, popular pharmacist Harvey P. Bissell served in an era where reform was incredibly controversial. Not only did he establish one of Ridgefield‘s longest lasting pharmacies, Bissell’s Pharmacy, he also worked tirelessly to reform State Health Department and narcotic laws, improving health standards across the state.

“We know some of these names from local landmarks, roads, buildings, headstones and plaques around town, but we learned much more about who these men and women were and the challenges they faced just to serve as a voice for their neighbors and friends,” Alec Pool said.

Stories like Keeler’s, Bradley’s, and Bissell’s are undoubtedly noteworthy, yet mostly unknown and unrecognized by the public. Now, curious Ridgefielders can use Rep. Frey’s list to explore their town’s legislative origins, and hopefully find pride in the heroes and heroines that have lived there before him. The information includes the legislator’s name, place of birth, party, occupation, years of service and date of death.  Curiously, a gap in the 1800’s doesn’t identify party.  According to the state historian, it apparently wasn’t deemed noteworthy and is omitted from state records.

“Our hope is that this list will be used as a resource by teachers and students to gain a better understanding of the people who came before us and influenced our lives in innumerable ways,” Miles Tullo said.

Rep. Frey echoed Flynn’s comments. “I want to thank Petros, Nicholas, Alec, Miles and Christopher for working to make this project a reality, compiling the data and donating the result of their efforts to the Ridgefield Historical Society to be used in the future,” Rep. Frey said. “Their research involved countless hours at the state library, the legislative library, Secretary of State’s Office, and searching the internet for missing information.  And none of this would have been possible without the incredible help of House Clerk Ann Clark and Ridgefield’s Jack Sanders who provided invaluable research and support throughout.”

The project will be part of the Ridgefield Historical Society collection, and can also be viewed online at: https://www.cthousegop.com/frey/representing-ridgefield-since-1776/\ 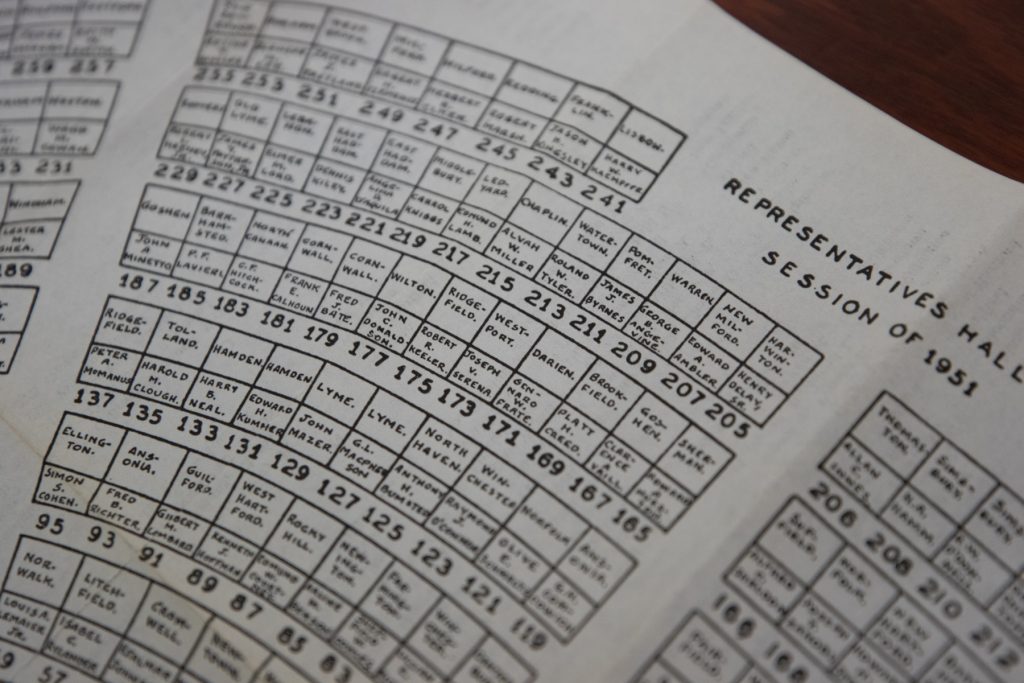 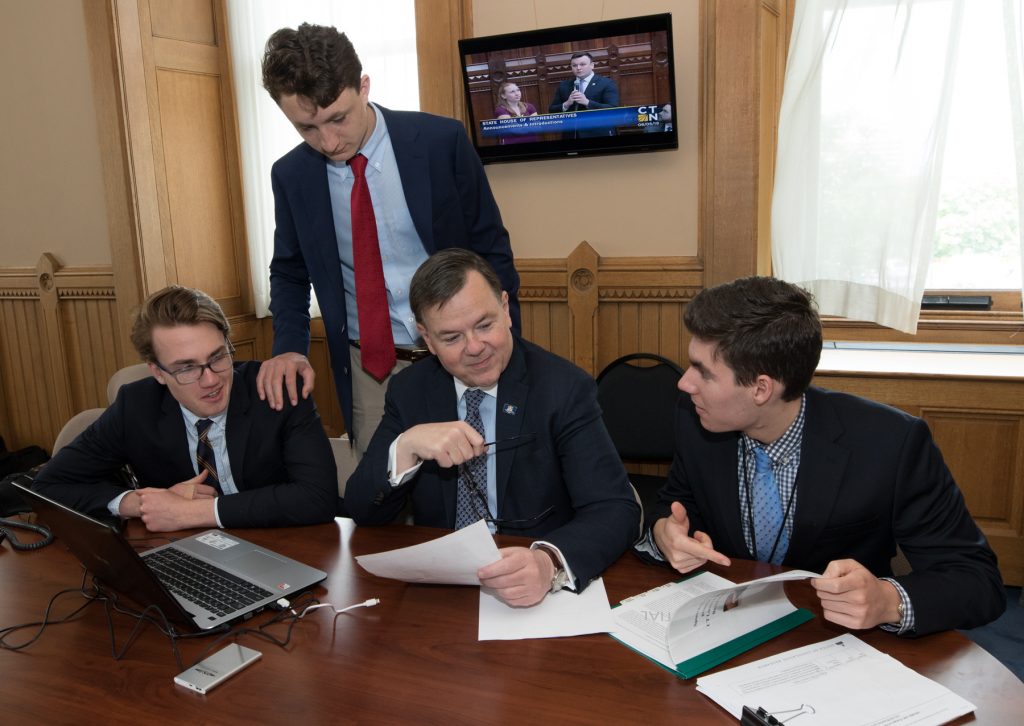 During a session day at the Capitol, Rep. Frey worked with interns Christopher Flynn, Miles Tullo and Alec Pool to finalize the research project.