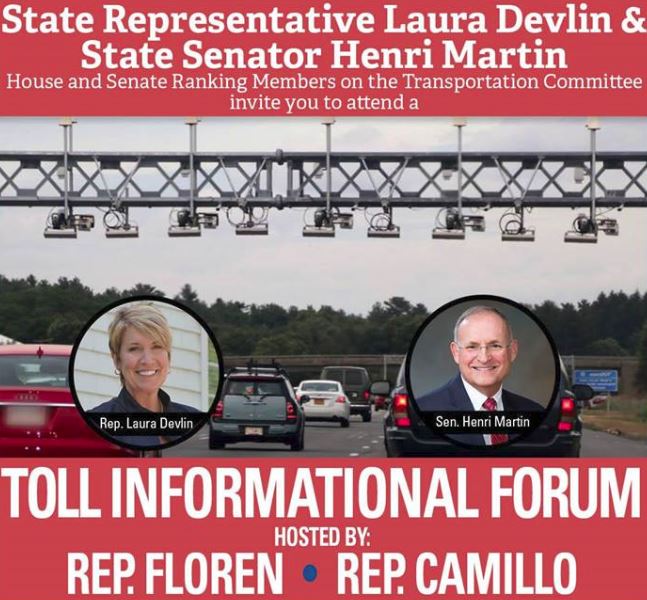 “My motto has always been ‘needs before nice-to-haves.’ Modernizing our transportation infrastructure is a need. Tolls are neither,” Rep. Floren said. “Last year, we avoided tolls by using existing revenue to fund critical infrastructure and transportation projects. This year, the state’s Bond Commission was able to do the same while staying within the newly enforced $1.9 billion bond cap. Republicans have created an alternative plan to tolls based on this strategy called ‘Prioritize Progress.’ We believe the state has enough revenue to meet its primary needs, namely transportation, education, and critical social services for children, the elderly and the disabled. Beyond those core functions of government, we need to be selective with our remaining funds because people are losing confidence in Hartford’s ability to control spending. Each year, the state asks for more and more money from our middle class and business community, with little to show for it. Before we consider tolls, the administration and the Democratic majority must prove they can do more with less, and make the best use of the taxpayers’ money.”

“I am glad we were able to put this together and we thank Representative Devlin and Senator Martin who will be providing us with the facts about tolls,” Rep. Camillo said. “I’ve been saying it throughout session and I will say it again – tolls are another tax that will disproportionately affect commuters and the middle class. More than 70 percent of toll revenue will come directly from our pockets and the economic impact will be widespread. Small businesses will need to raise prices to compensate for the added operational costs. Families will need to live on even smaller budgets and will have less disposable income. Workers will be forced to alter their commutes or search for other employment options. Travelers will attempt to avoid tolls by using backroads, which will cause traffic in our towns and neighborhoods. There are viable and concrete alternatives that are being ignored. We must seriously discuss and consider these options before we continue to nickel and dime the residents of our great state. We need to look at the bigger picture before making such a consequential policy decision.”

In addition to the financial burden on residents and employers, there have been several issues raised in response to the proposals. Rep. Camillo cited Massachusetts as an example, which has struggled to collect toll fees from out-of-state drivers without EZ passes or those with unreadable plates. Other concerns include the cost to install and operate tolls, and the number of gantries proposed, which greatly exceeds the previous number on Connecticut highways (14).

Another issue raised by Republicans is a provision in one of the bills requiring any tolls plan drafted by the Department of Transportation (DOT) to go into effect within fifteen days if no legislative action is taken. The General Assembly would not have control over the rates (both regular and congestion pricing), frequencies and placement of toll gantries, the administrative costs, nor any future changes to toll fees should there be a need for more revenue.

Despite their position on the issue of tolls, the representatives are encouraging residents from both sides of the debate to attend the forum because this is a community discussion and every opinion matters. Following the presentation, attendees will be given the opportunity to ask questions.

House and Senate Republicans will hold an Anti-Tolls Rally on Saturday, May 18th on the North Lawn of the State Capitol from noon until 3:00 p.m.