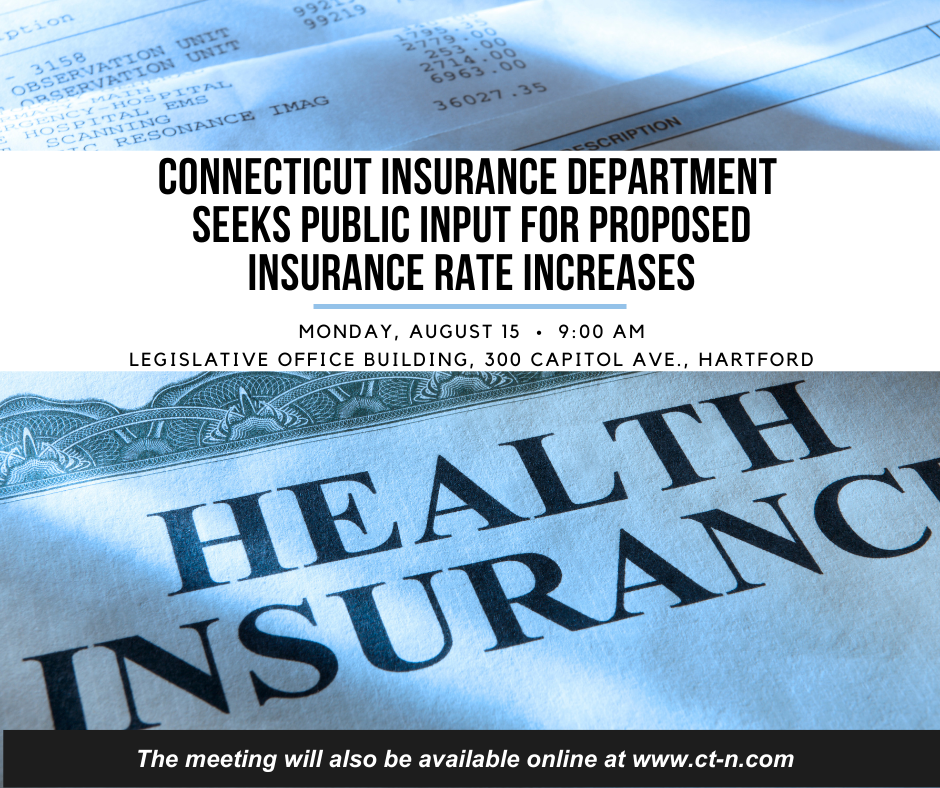 I just wanted to let you know that earlier this year when several healthcare insurers who offer plans in our state proposed substantial rate increases that averaged more than 20%, our side of the aisle immediately called for full legislative public hearings on the matter. With only a brief comment period open, the attorney general asked for department-level meetings but fell short of joining our calls for full public hearings before the General Assembly.

Despite increasing public outcry and steady pressure from lawmakers, currently only a public informational meeting has been scheduled by the state’s Insurance Department. Unfortunately, informational meetings are not the same as public hearings before the legislature and may operate with different rules.

Here is the official notice:

The Connecticut Insurance Department is asking for public comment during an August 15 informational public meeting on the health insurance proposals filed by CIGNA Health & Life, CTCare Inc., CTCare Benefits Inc., and the ConnectiCare Insurance Company, Inc. for 2023 plans both on and off Access Health CT, the state’s federal Affordable Care Act exchange.

The public informational meeting will be held in a hybrid format, both in person at the Legislative Office Building, Hartford, and online. The meeting is open to the public and can be viewed on CT-N.

Viewing: This hybrid informational meeting will be held both in person and online. CTN will web stream the hearing live.

The public will have an opportunity to submit questions and/or provide comments specific to the rate filings. Anyone wishing to speak virtually at the meeting via Zoom can sign up by sending an email to cid.RateFIlings@ct.gov with your name and written comments attached no later than Friday, August 22, 2022. Anyone who wants to speak in person can sign up on the morning of August 15 at the Legislative Office Building beginning at 8:30AM.

In order to accommodate all those who wish to speak, oral comments at the hearing will be limited to 3 minutes per person. The online public comment period began on July 8 when the filings were posted for public review and such period will be open until the decision is made by the Department.