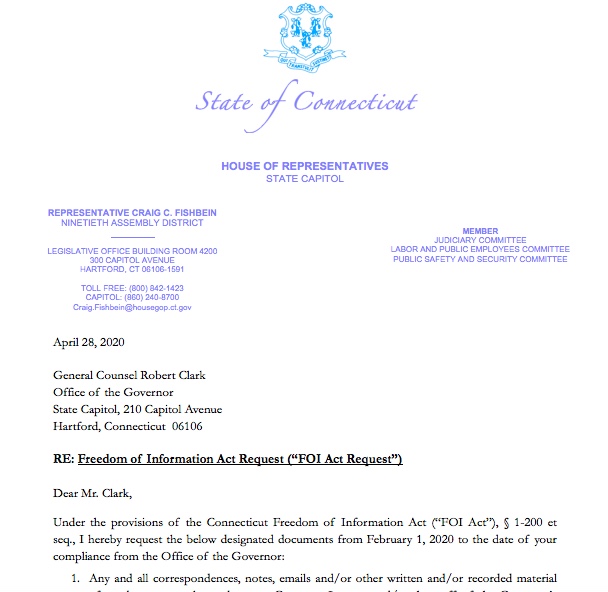 WALLINGFORD – State Representative Craig Fishbein (R-90) yesterday made a Freedom of Information request to Governor Lamont for information and correspondence related to the state’s creation of and participation with the Reopen Connecticut Advisory Board.

Since the Covid-19 pandemic hit, Governor Lamont issued several Executive Orders. Now that the virus spread appears to be slowing, the Governor unilaterally created the “Reopen Connecticut Advisory Board” to define metrics to begin allowing businesses to reopen in the state.

“Without input from, and certainly without the backing of the legislature, the governor unilaterally issued Orders that closed businesses, put thousands of people out of work, and affected every resident of our state,” Rep. Fishbein said. “The eventual unpacking and rolling back of those decisions will similarly affect every citizen and should be available for public scrutiny. Democracy flourishes in the face of bright light, and I am hopeful that the Governor agrees and willingly discloses the documents.”

“The fact of the matter is that myself and the other residents of Connecticut are entitled to an open and transparent disclosure of the creation, appointment and doings of this unilaterally created group,” Rep. Fishbein said. “The process should not be shrouded in darkness or be without sufficient transparency or public scrutiny.”

“The people of Connecticut have shown they are willing and able to take the necessary steps to maintain safe distancing and safe operation of businesses, and have abided by the governor’s many Executive Orders to flatten the curve and slow the spread,” Rep. Fishbein said. “Now is the time to find safe ways to open the economy and get the state moving forward again. Especially during this time of national concern and constantly evolving information regarding the pandemic, it is important to make certain that our government is operating openly and with full transparency. Our residents deserve at least that.”