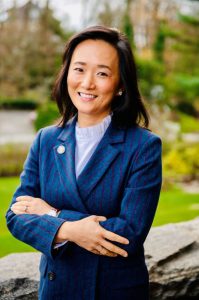 State Representative Kimberly Fiorello was sworn in for her first term in office on January 6, 2021. She proudly represents the 149th Connecticut General Assembly District, which encompasses parts of Greenwich and Stamford.

Kimberly serves on the following committees:

(3)  Challenging any legislation that could potentially threatened local zoning decisions

Kimberly was born in Seoul, South Korea, and grew up in Reston, Virginia. Her dad worked at the U.S. Department of Defense and her mom owned a coffee shop. She attended the United States Military Academy at West Point before transferring to Harvard College where she earned her degree in Economics.

Her first job was at Salomon Brothers; her most exciting job was as a reporter in Hong Kong for the Wall Street Journal; her hardest job was in the kitchen at Wallse restaurant in NYC; and her most rewarding job is being a wife and mom.

Kimberly is an active member of her community. She was elected to two terms on the Greenwich Representative Town Meeting from District 7, and she is a co-founder of the Charter Oak Leadership Program — a Connecticut-based non profit that advances the core principles of our country and free market enterprise. Kimberly enjoys volunteering on the Collections Committee of the Greenwich Historical Society and at her church, Grace Church of Greenwich.

Kimberly resides in Greenwich with her husband, Jon, and their four children, two dogs, and four pet hens, who daily provide delicious eggs for breakfast!