While Sen. McLachlan (R-24) is a GAE Co-Chair, public hearings must be called by two of the committee Co-Chairs. Under state law, the GAE Committee is required to hold public hearings on the APA reports within 180 days of issuance. Hearings for three state agencies are overdue. 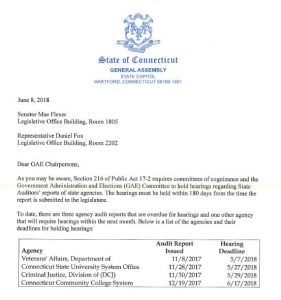 “Voters elected us to be the caretakers of taxpayer dollars and ensure that state agencies are spending those tax dollars efficiently and for their intended purposes,” Sen. McLachlan said. “These hearings allow legislators to question the state agencies about the Auditors’ findings, how these issues were able to occur, and what the agencies will do to prevent further occurrences. Allowing the statutory deadlines to pass without these public hearings does a great disservice to our employers, the taxpayers of Connecticut.”

The APA issued reports for the Department of Veterans Affairs, the Connecticut State University System Office, and the Division of Criminal Justice in November of 2017. According to the law, hearing should have been conducted before the end of May. A report for the Connecticut Community College System was issued in December of 2017. The deadline for a hearing on that agency’s report is June 17.State Rep. Laura Devlin is the head House Republican on the General Administration & Elections Committee.

“Many times, the auditors uncover significant findings that we should NOT allow to collect dust leading to further fiscal maleficence,” said Rep. Laura Devlin (R-134). “Legislators are elected to make sure your tax dollars are spent wisely not wasted.”

Some of the APA findings include:

Sen. McLachlan and Rep. Devlin said they would like the public hearings to be scheduled as soon as possible so they can question agencies about the APA findings.