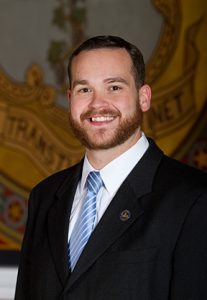 An Ellington resident raised in East Windsor, Representative Christopher Davis was first elected to the Connecticut General Assembly in 2010 to represent both communities in the 57th District, serving as the youngest member of the General Assembly at that time.

Representative Davis has worked tirelessly on behalf of his constituents for fiscal responsibility in state government, advocating for reduced spending, limited taxation, and reductions in our state’s debt obligations. As a leader on the Finance Committee, Representative Davis co-authored the historic 2017 bi-partisan compromise budget that enacted caps on state spending, instituted a bonding cap, and implemented a volatility cap requiring the state to deposit excess revenues into the rainy day fund.

Serving as one of ten members of the State Bond Commission that is chaired by the Governor, Representative Davis has been a staunch opponent of excessive and irresponsible borrowing.

The East Windsor Chamber of Commerce named Representative Davis the 2016 Business Person of the Year for his community service and advocacy for businesses and he was selected for the 40 Under Forty Award by the Hartford Business Journal in 2013.

Representative Davis has also been a leader on the crumbling foundations crisis in Eastern Connecticut, serving as an Incorporator of the Connecticut Foundations Solutions Indemnity Corporation and co-authoring the state’s program to provide assistance to impacted homeowners.

A product of East Windsor schools from kindergarten through high school graduation, Representative Davis graduated with his Bachelors of Arts and Master of Arts degrees in Political Science from the University of Connecticut. Prior to his election as State Representative, Davis was an elected member of the East Windsor Zoning Board of Appeals.

Representative Davis is a REALTOR in the greater Hartford area, and resides in Ellington with his wife, Emily and daughter.