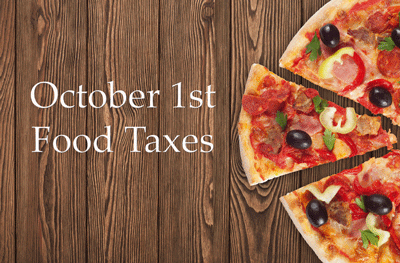 Earlier this year, Democrat lawmakers labeled the new tax as only a 1% tax increase on items already taxed at 6.35%, but the Department of Revenue Services (DRS) statement clarifies that the new 7.35% tax will also apply to many food items that have never been taxed at all before when sold in grocery stores.

“Public outrage stopped Governor Lamont’s attempt to expand the sales tax to groceries early in the legislative session. This expansion of the new ‘meals tax’ is a back-door way to tax a wide range of everyday groceries,” said Rep. Davis. “These taxes will hit families, seniors on fixed incomes, and others who buy in small quantities the hardest. Connecticut already suffers from a high cost of living, expanding taxes to many everyday prepared foods and certain groceries will make our state even less affordable.”

“The definition of ‘meal’ according to the policy statement released by the DRS, ‘may be a full dinner or it may be a single item.’ This means that many traditional grocery items are now to be considered meals and subject to the higher sales tax,” noted Rep. Davis.

Examples of Taxable “Meals” According to DRS (will be taxed at 7.35% in eating establishments AND grocery stores):

Examples of Taxable Drinks According to DRS (will be taxed at 7.35% in eating establishments AND grocery stores):