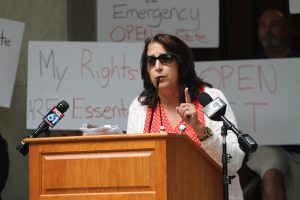 Hartford – On Friday morning, a special legislative oversight committee voted in favor, strictly along party lines, for Governor Lamont to maintain his emergency powers. On March 10, Governor Lamont signed the initial declaration of a health emergency due to the COVID-19 pandemic. This order, which was slated to expire on September 9, was extended by the governor last week. The special legislative committee voted in favor of the order 6-4, which will now extend the governor’s unilateral rule through February 9, 2021, which passes the start of the 2021 Legislative Session.

Thursday afternoon, on the east steps of the State Capitol, some Republican members of the legislature and public joined State Representatives Anne Dauphinais (R-44th) and Rick Hayes (R-51st) to have their voices heard. The gathering was in direct opposition to the extension of these executive orders and many have expressed the need for the legislature to have a seat at the table, do the jobs they were elected to do, and provide the necessary checks and balances during this unprecedented time.

“It is disappointing, but not surprising that Democrats voted to continue the one-person rule of Governor Ned Lamont,” said Rep. Dauphinais. “This allows the governor to make all decisions that go well beyond public health for another five months. Legislators will continue to be left out of these decisions, which to me and my constituents is unacceptable. Under these executive orders, landlords in this district are losing their rental properties, businesses are struggling or closing, and others still have not been allowed to reopen. The people of our districts elected us to do a job and they deserve to have us speak on their behalf.”

The need for the legislature to have a seat at the table over the next several months was echoed by Rep. Hayes.

“The governor has and continues to take away the voice of the people. I was elected to serve and represent the people of the 51st District. With this extension to February 9, 2021, he continues to strip away our ability to do the job we have been elected to do. The governor maintains that these orders remain critical in fighting COVID-19. I believe the involvement of the legislature is a key component to helping the people of our state through some of the most difficult times many of us have faced,” Rep. Hayes said.

Both Representatives have been contacted through social media, emails, and calls from their constituents over the past several days. The conversation over the extension of the governor’s executive powers will continue to be a very controversial topic through the Fall.