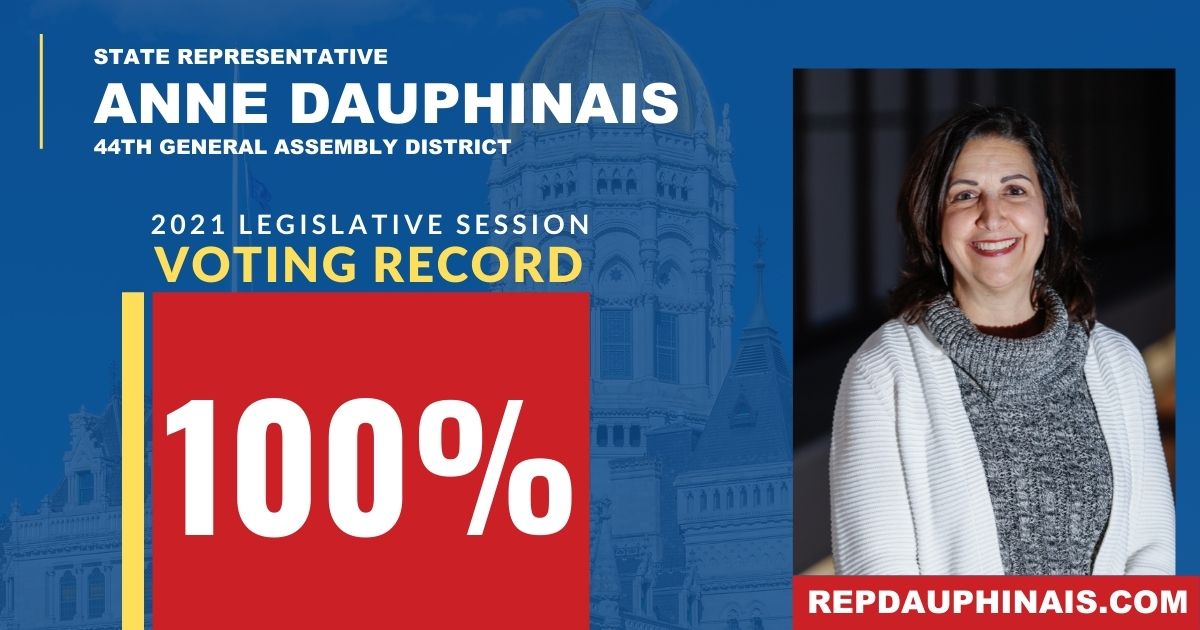 This year, legislators cast their vote on 467 separate pieces of legislation that made it to the floor of the House of Representatives during the regular and special sessions.  Perfect attendance is a very difficult thing to achieve, with only about 20 to 30 percent of legislators able to do so in any given year.

Rep. Anne Dauphinais is in her third term serving in the legislature. She has been a fierce advocate in preserving individual medical and religious freedoms along with protecting parental rights. Her tenacity in protecting personal freedoms earned her the 2021 Legislator of the Year award from the Connecticut Chiropractic Council.

“I am so grateful to have been abundantly blessed to have had the ability to vote each and every time. I am here because of those that have given me their vote of confidence across this district. It is one of the greatest honors of my life,” Rep. Dauphinais said.

According to statistics compiled by the House Clerk’s Office, Rep. Rick Hayes received a statistical 100% voting record. He has served in the legislature since 2018 and he also serves on the Board of Selectman in Putnam. He served 33 years as Putnam Chief of Police and is a certified Fire Marshal in the Town of Thompson. Rep Hayes has dedicated his life to public service, serving communities in northeastern Connecticut. His background in public safety is an irreplaceable asset to the state legislature.“I am proud to achieve a 100% voting record during all three sessions which I have represented the people of the 51st District,” Rep. Hayes said. “This takes lots of work and commitment.  The 2021 session was trying and more difficult. I promise to continue working hard for the great people of our district,” he added.

Rep. Brian Lanoue, also in his second term has been a persistent advocate for the constituents he is proud to serve. He has been the driving force in the expansion of the CRISIS Pilot Program Initiative across Connecticut which helps those with mental health and substance abuse issues. After three years of unwavering advocacy, a new law Rep. Lanoue originally introduced was passed during the 2021 session to protect children while attending camps through background checks. Rep. Lanoue was recently appointed to the Needs of Persons with Intellectual Disability Task Force to continue his impressive record of assisting those in need.

“I love getting up every day and having the honor to serve the people of eastern Connecticut in the General Assembly. There is so much that our part of the state has to offer and I am committed to being their voice at the Capitol- there is no better job in the world,” Rep. Lanoue said.

Rep. Dauphinais serves as the Ranking Member on the legislature’s Committee on Children, and also serves on the Public Health, Transportation and Internship Committees. Rep. Hayes is currently in his second term and serves on the legislature’s Appropriations, General Law and Public Safety Committees. Rep. Lanoue serves as the Chair of the Internship Committee along with the Banking, Commerce, and the Committee on Children. All three legislators are members of the Connecticut General Assembly Conservative Caucus.

The next regular session of the legislature will convene in February of 2022.