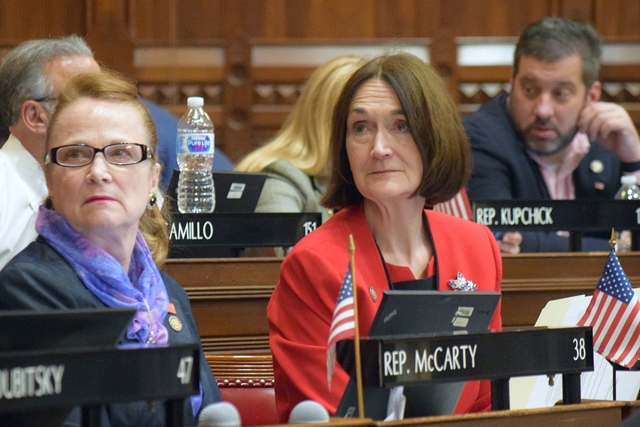 HARTFORD – At approximately 10:30 Monday night, after a full day of debate, the House of Representatives passed a biennial budget with a vote of 86-65. All Republicans, including State Representatives Kathleen McCarty (R-Waterford) and Holly Cheeseman (R-East Lyme), and a few Democrats, voted against the plan.

“This budget places a huge burden on our small businesses, human service providers and non-profit sector, which provide 80% of our jobs and, I believe, are the true heartbeat of our community,” said Rep. Cheeseman, member of the Finance, Revenue and Bonding Committee. “We heard public testimony against these increased mandates, taxes and fees, and yet we’re going to implement them anyway? They don’t have unlimited resources. This budget plan was not the answer. In addition, this budget is full of hypocrisy. For example, if the majority party in Hartford is so concerned about the environment, why is the money from the 10 cent fee on plastic bags projected to raise $ 54.5 million in the next two years going into the General Fund, as opposed to going to recycling and pollution remediation? Our entrepreneurs are rightfully desperate for our help just to stay in operation.”

“Connecticut is still facing considerable fiscal challenges,” said Rep. McCarty, member of the Appropriations Committee. “This budget has some good elements in it, no doubt, but overall it fails to offer innovative solutions that the state needs to fix its structural problems. The re-amortization of the teacher pensions will cost the state an additional $17 billion going forward.  The state must protect its hard-working teachers, ensure the solvency of the pension fund and contribute the state’s share on an annual basis. We need to provide our residents with the confidence that our state’s fiscal house is in order. Taxing businesses and adding nearly $2 billion in new taxes is not the way to build economic growth. I am disappointed that the state budget does not protect businesses, nor our middle class residents.”

Democrats, in forcing this budget plan through the legislature, are increasing taxes by $1.75 billion over the next two years to fund a 5.3% increase in spending. Essentially, this is a $50 million tax hike on Connecticut businesses. There will be new taxes on plastic bags (10 cents), vehicle trade-ins, ride share services like Uber and Lyft (25-30 cents), alcohol, digital downloads and subscriptions like Netflix (6.35%), and prepared foods like restaurant meals (a new 1% tax on top of the current 6.35% tax). In addition, there is a new $5 charge on vehicle registration that will raise $8 million to help reduce greenhouse gas emissions, but only $3 million is going to rebates for zero emission vehicle purchases and $5 million is going into the General Fund.

Republicans argue that this tactic of adding more taxes, instead of looking for spending cuts, is simply a continued failed approach employed by Former Governor Malloy. Legislative leaders are focused on their political and progressive goals, rather than the fiscal restraint and business-friendly environment that Connecticut needs for a sustainable future.

For years, Republicans have offered fully-vetted budget proposals that Democrats ignored. When the numbers across the aisle were more balanced in the House, Democrats were forced to listen and a bipartisan budget that pointed Connecticut in the right direction was passed just last year. This budget undoes much of the good in the bipartisan budget – like protection of the Special Transportation Fund (STF) – making it clear that there was no intention of negotiating a bipartisan deal.

Therefore, many amendments were proposed yesterday by Republicans to improve the budget but all were rejected on party-line votes. These amendments attempted to find budget savings to cut taxes, fully fund the STF, reduce teachers’ retirement tax burdens on future generations, review and renegotiate existing contracts for services, get rid of political earmarks, and reduce the number of state employees through attrition.

Unfortunately, the budget we ended up with fully funds elections with taxpayer dollars, increases taxes on everyone, maintains expensive contracts, refinances the teachers’ pension fund, and creates additional funding for state employee salaries – including bonuses for high-level attorneys.

This plan awaits a vote in the Senate.