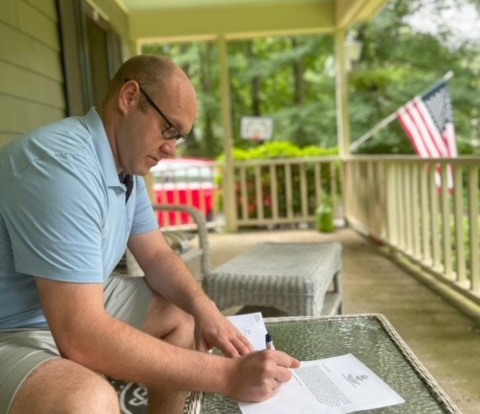 HARTFORD – State Representative Devin Carney, who serves as Ranking Member of the Transportation Committee, has signed a petition to request a special session on the juvenile crime crisis. The call to action follows a week where a New Britain man was struck and killed by a stolen vehicle operated by a repeat juvenile offender, as well as an incident in Glastonbury where shots were fired at a resident when she was confronting individuals attempting to steal her car. There have also been numerous reported incidents of car thefts and break-ins across the 23rd District over the past few years.

“I have signed a petition requesting a special session so we can address a major public safety issue,” said Rep. Carney. “A bipartisan agreement is needed to protect teenagers, local residents, and even law enforcement, but all parties need to be at the table. No one wants to see a young person’s life ruined, but we also need to hold repeat offenders accountable. Let’s find a way to deter youth from these crimes by giving them more support while also allowing the police and the court system to do their jobs. Keeping everyone safe is a top priority.”

A press conference was held yesterday where state legislators, chief elected officials, and top law enforcement officers from New Britain and Wolcott – the sites of crimes last week that intensified the spotlight on the state’s juvenile justice system – held a joint press conference to discuss the issue and a path forward. The crime in New Britain brought renewed calls for change statewide when it was revealed that a 17-year-old charged in connection with the crime had been arrested 13 times in less than four years.

Addressing motor vehicle thefts by juveniles was a top priority for Republicans heading into the legislative session in January. Ultimately, majority party lawmakers would not act on Republican proposals to hold juveniles—repeat offenders, in particular—accountable for the serious criminal acts they commit.

In their call for action Wednesday, Republicans stated the General Assembly must enact legislation concerning juveniles who are repeat felony offenders. Among the concepts they say should be considered are:

*   Allowing courts to order investigations of family circumstances of repeat offenders, authorizing post-arrest detention if such juveniles are deemed to be risks to public safety;

*   Eliminating the six-hour limit on detaining such juveniles without a court order;

*   Requiring courts to electronically monitor juveniles charged with stealing a car while they are awaiting trial for car theft until criminal proceedings are resolved.

Leaders from both House caucuses and Senate Republicans met yesterday to discuss the issue as a first step towards reaching a bipartisan solution. Governor Lamont can also call members of the General Assembly into a special legislative session. While lawmakers can call themselves back to Hartford by petition—a majority of the membership in each chamber, House and Senate, must file petitions with the office of the Secretary of the State.