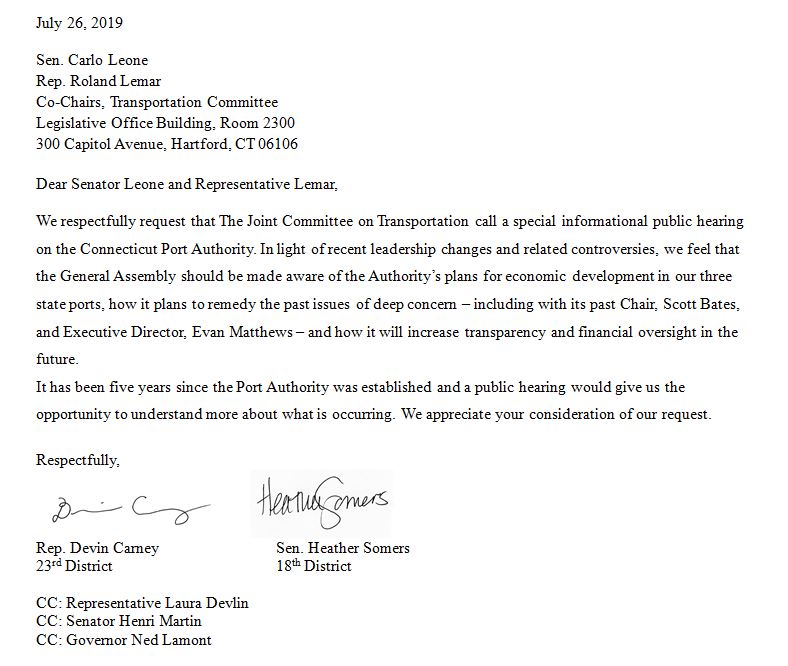 State Rep. Devin Carney (R-23) and State Senator Heather Somers (R-18) are asking that the Transportation Committee  hold a public hearing to address issues pertaining to the Connecticut Port Authority, its recent leadership changes, and related controversies. Both legislators want the opportunity to obtain answers and receive a more detailed explanation of the ongoing problems at the quasi-public Authority.

Rep. Carney, the Ranking Member of the legislature’s Transportation Bonding Sub-Committee said, “I am very concerned about what is occurring at the Port Authority and believe the public deserves answers. As a member of the Transportation Committee and with the Port Authority’s offices in my district, I am calling for a public hearing to find out how the Authority is being managed and to find out exactly what went wrong and when.”

“It has been five years since the agency was established, and I feel strongly that given its recent leadership changes, there is no better time than now for us to take a close look at what is going on regarding the Port Authority and how it is accomplishing its statutory goals,” added Carney.  “There appears to be more going on here than what we are being told and the legislature owes it to the people of this state to get to the bottom of it. We must to have more transparency and more oversight.”

“There are many questions to be answered to give the public confidence that this organization is meeting its responsibilities to the taxpayers at a critical time. It is very disturbing that we are not receiving more information about issues with staff and finances,” said Senator Somers.

“The public deserves transparency and it is unacceptable that an Authority with such a large budget is in such disarray,” Somers added. “It is imperative that swift action be taken as the state is entering into a multi-million dollar investment into New London’s deep- water port.  In order to move forward, Connecticut’s residents and businesses deserve a non-partisan Port Authority comprised of industry experts in deep water ports and international shipping.”