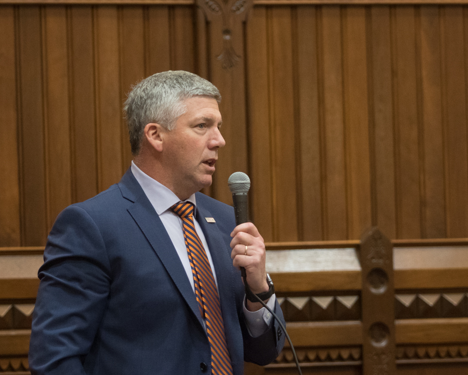 HARTFORD – State Rep. Pat Callahan (R-New Fairfield) supported the lone piece of legislation that the House of Representatives considered during Monday’s special session. The legislature was called into session in order to take action on a partial extension of the gas tax, increased funding to the Low Income Heating Assistance Program, an extension of free bus fare, and to approve allocations of the “hero pay” program to reward the efforts of some essential workers for the efforts during the pandemic.

“The bill that was passed during Monday’s special session does give many peace of mind heading into the colder, Winter months. However, the legislature failed many other residents who are in need of some assistance given the ever-increasing energy costs, specifically of electricity, heating oil, and general inflation. It’s disappointing that any attempt to amend the underlying bill to provide more relief to residents and businesses was stricken down in a partisan way,” said Callahan.

Throughout Monday’s lengthy debate, House Republicans offered several amendments to improve the policy adjustments that were being discussed. For example, Callahan was supportive of adding diesel fuel to the gas tax holiday. Unfortunately, this concept was dashed, leaving many in the agriculture and trucking industries without meaningful relief.

Additionally, House Republicans offered a motion to re-convene a special session that would have focused on repealing the Highway Use Tax – or “Truck Tax”. This tax, effective January 1, 2023, will lead to higher prices on food and Connecticut’s farmers have advocated for its repeal.

“While I was supportive of a partial continuance of the gas tax holiday, it’s nearsighted to claim that this will offset the new Truck Tax that is slated to go into effect on New Year’s Day. That tax will add a layer of inflation that those in Connecticut simply cannot afford. Looking ahead to the regular session, which convenes in a few weeks, I will be advocating for ways to lower living costs. During these turbulent financial times, record state surpluses should be returned to those who created them – the taxpayers,” concluded Callahan.

The legislature will convene for its regular session on Wednesday, January 4, 2023, marking the start of a six-month long law-making period that will conclude in June. For more information on state issues, you can visit Rep. Callahan’s website at RepCallahan.com.