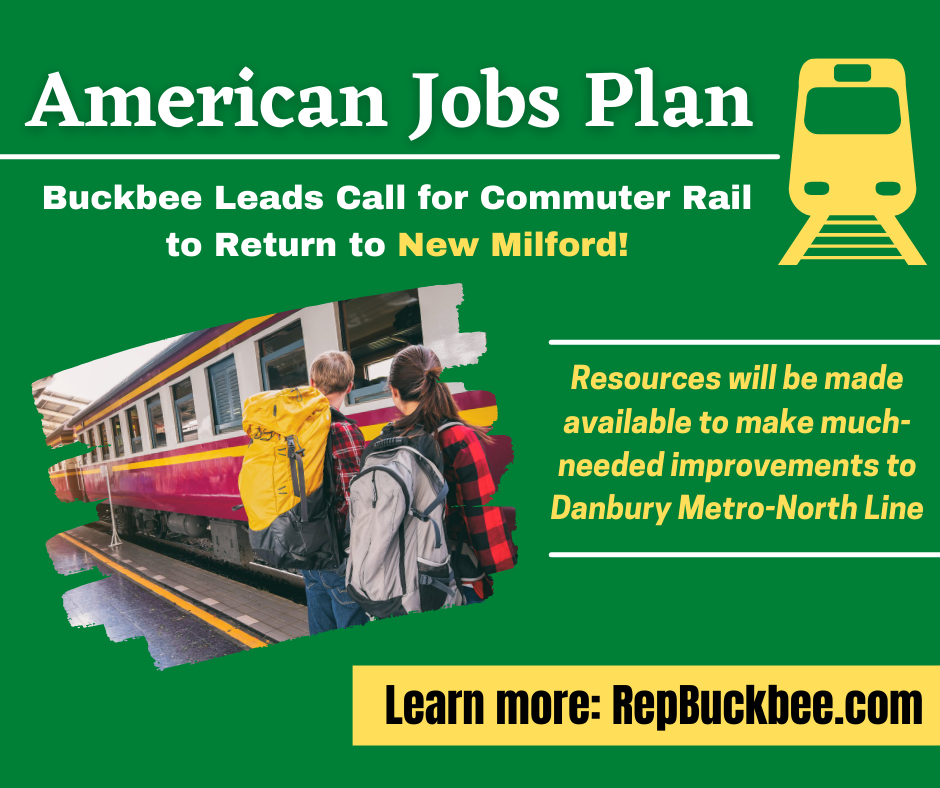 A letter signed by House and Senate legislators calls for “dedicated funding for the electrification of the existing Danbury Branch Line service between the South Norwalk and Danbury Stations as well as extending passenger rail service from Danbury to New Milford.”

“I look forward to working with the Transportation Committee and my fellow colleagues on both sides of the aisle to return a commuter rail option to the residents of New Milford,” explained Rep. Buckbee.

“The vision for improving the state’s infrastructure must include electrification and extension of the Danbury Branch of Metro-North Railroad,” said Rep. Allie-Brennan. “For years, politicians, administrations and the general public have cited the need for upgrades to the Danbury line. Because of the resources now available from the recently passed federal infrastructure bill, we now have the opportunity to address those needs. Whether or not you live in a town on the Danbury line, this investment is important for you. These long needed upgrades will secure the economic vitality of the region while benefiting home values, relieving road congestion, and reducing our carbon footprint.”

“It’s been more than 50 years that commuter rail ran through our community and now that the resources are available from our federal partners let’s use those dollars for what they’re intended for – connecting more travelers to quality public transportation. With the addition of a greater commuter rail option in western Connecticut, our roadways will be less congested, tourism opportunities will increase, and it’ll be easier for daily commuters to get to their jobs,” said Rep. Buckbee, a long-time advocate of connecting local rail to the Danbury Metro-North line.

“Modernization and extension of the Danbury branch has been a long-standing priority of the region,” said Francis R. Pickering, executive director, Western Connecticut Council of Governments. “Improving service on the line will build on the dynamic growth that has propelled the region over the last year and that has heralded the state’s economic renaissance.”

The Danbury Branch includes stops at Danbury, Bethel, West Redding, Branchville in Ridgefield, Cannondale, Wilton, and Merritt 7, as well as in South Norwalk, where it connects with the main New Haven Line, with service available from Grand Central to New Haven.

Opening in 1852, the Danbury Branch Line still uses diesel powered trains that push train cars to Norwalk to catch the New Haven main line and pull train cars to Danbury. Danbury Branch Line investment has been a contentious topic, mainly due to the cost. There have been studies over the years about extension and electrification, but no progress has been made in bringing that to fruition.