Today State Reps. DebraLee Hovey (R-112), Dan Carter (R-2) and Mitch Bolinsky (R-106) spoke out in favor of their bill to protect the privacy of Sandy Hook families and others following the death of a child. HB 5733 would allow officials to restrict access to the death certificates of children when it is likely to cause undue hardship for the family of the child. Current law allows any adult the ability to purchase a copy of the death certificate of any resident from their municipality’s Town Clerk. 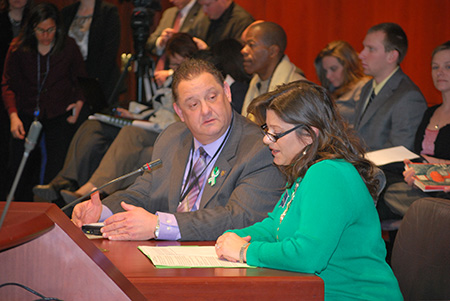 The bill was prompted by Newtown Town Clerk Debbie Aurelia who was inundated with media inquiries following the shooting at Sandy Hook, jeopardizing families’ privacy and capitalizing on their grief.

“This legislation will both respect and protect the privacy of families who have suffered the unimaginable loss of a child,” Rep. Hovey said.  “During tragic circumstances it is imperative we have laws that show empathy for those affected while at the same time preventing unscrupulous individuals from exploiting, or profiting from, their grief.  It’s the right thing to do.”

“We must protect the privacy of Sandy Hook victims whose death certificates contain information that will only fuel the painful media circus in Newtown,” Rep. Carter said. “Not only would this proposal prevent journalists from abusing the information on death certificates, such as the location of gravesites, but would reduce the threat of identity theft.” 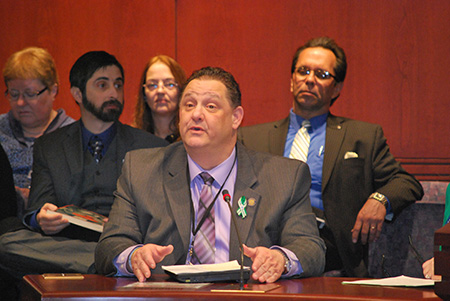 Rep. Bolinsky testifies before the Public Health Committee in favor of a bill to help protect the privacy of Sandy Hook families.

Reps. Carter and Bolinsky, along with Newtown Town Clerk Debbie Aurelia, testified before the legislature’s Public Health Committee today in Hartford regarding the legislation.

“In limiting access to ‘long form’ death certificates, we can help shield families and victims from exploitation in cases such as the Sandy Hook massacre where children died under uniquely tragic circumstances,” Rep. Bolinsky said. “In addition to respectful privacy protection, this bill would act as an effective deterrent for identity theft, while still allowing for appropriate public disclosure, and I urge my colleagues in the Public Health Committee to pass it.”

“Since the tragic Sandy Hook shooting, I have witnessed an extreme invasion of privacy of victims’ families at the most inappropriate times,” said Debbie Aurelia, Town Clerk in Newtown. “I support the introduction of this bill, and I continue to advocate for even tighter restrictions on all public death records, which I believe empower identity thieves and disclose too much detail when offered freely.”

Following today’s hearing in Hartford the Public Health Committee will decide whether or not to advance the proposal through the legislative process.