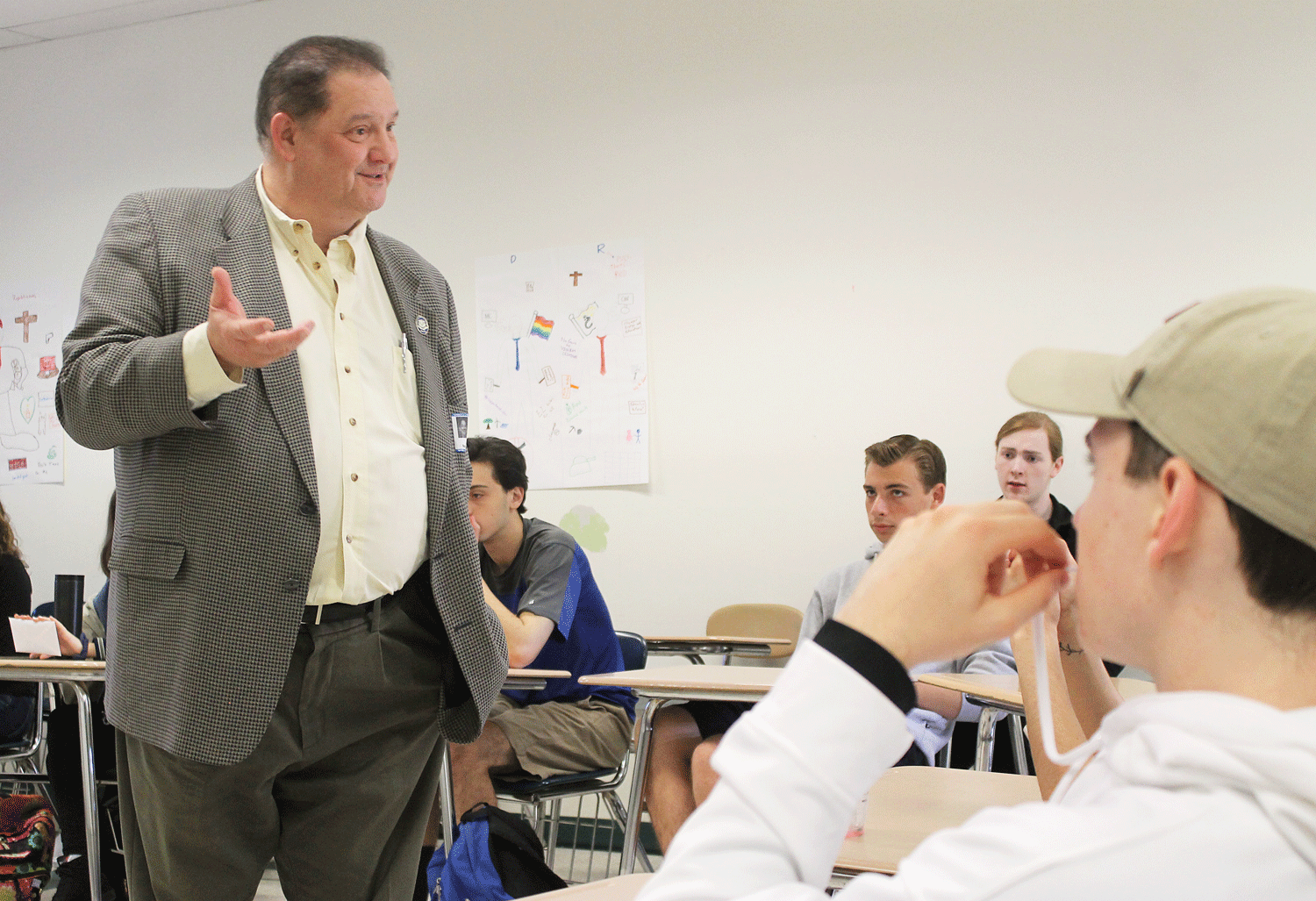 NEWTOWN – Mr. Edwards’ government classes are heading into the final weeks of the spring semester at Newtown High School, with the senior class just weeks away from graduation. On Monday May 6th, State Representative Mitch Bolinsky (R-Newtown) had the opportunity to visit with the students as they work on an interesting “mock-Congress” project on the legislative process in general, including writing bills, debating, and working with each other to accomplish a goal.

Rep. Bolinsky observed, “Many of these students are just old enough to vote. Some even participated for the first time during Newtown’s April budget referendum. The three classes I visited on Monday were filled with energized, inquisitive young minds, good questions and, on some topics, surprising points of view. We discussed my winding road to public service, having begun my post-collegiate life as a private-sector marketing professional. Even though it sounds very different than lawmaking, I expressed to them my belief that good government should also be about knowing the needs of those we serve, being accountable and delivering on our promises.”

All three classes began with a one-question poll. Rep. Bolinsky asked, “Will you come back to Connecticut after you complete college or begin your career?” Of the three classes, only three students showed excitement to stay in our state.

“Students expressed perceptions of our state as an old-fashioned, inefficient, expensive place with a stagnant economy and a shortage of the kinds of jobs that excite them,” said Rep. Bolinsky. “The overall sentiment was an attraction to vibrant cities and lots of things to do for entertainment, which are conspicuously absent in Connecticut. We did discuss civic engagement in each class and getting involved in one’s community early to find fulfillment and make it a better place, perhaps as a volunteer or in service to a local board or commission.”

Throughout his visit, Rep. Bolinsky reviewed the state’s overall legislative process and responded to questions about topics being discussed in Hartford. Students also posed more personal questions, ranging from Rep. Bolinsky’s background to how he feels about major public policy points, like term-limits and legalization of recreational marijuana.

“I can tell these students are staying up-to-date through a variety of media, based on the questions I fielded today. I told them I’m kind of the strong, silent type – more concerned with reaching consensus, getting results on constituent issues and shaping sound public policy, versus always mugging for cameras. Actions speak louder than words and it’s always important to have friends available on both sides of the issue or policy point. When I propose legislation there is never an instance when I do not seek support from my political colleagues across the aisle. Working with each other, regardless of geographical location, party, or personal background, is the key to moving business forward in government, in work and even in our personal lives,” explained Rep. Bolinsky.

The legislature is moving to its final weeks of the current legislative session. State lawmakers are tasked with putting forth a balanced budget that will set Connecticut’s finances for the next two consecutive fiscal years – a task that Rep. Bolinsky is placing his full concentration on before the close of legislative business for the year, which will conclude on Wednesday, June 5th.