The forum was sponsored by a bipartisan group of legislators from the Route 7 corridor who are concerned that in the last few months, the state DOT has proposed raising rail and bus fares 21.28 percent over the next 3 years, significantly reducing rail service on the Danbury and Waterbury Lines. Additionally, the governor has cancelled over $4 billion in transportation projects state-wide and introduced a proposal to bring tolls back to the state, raise the gas tax 7 cents over 4 years and implement a new ‘tire tax’.

The forum was held in the Council Chambers at Danbury City Hall. 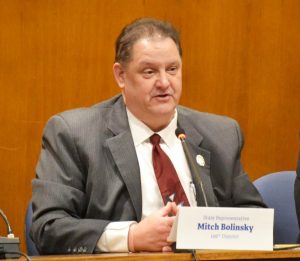 Rep. Bolinsky said, “I want to express my appreciation to Commissioner Redeker for being with us for this important community dialog. I also want to thank everyone who joined us on Monday evening, the turnout was impressive and clearly demonstrated the need for public transit in our region. In addition to our rail commuters, we had a tremendous response from folks who depend on bus transportation, particularly a huge contingent of folks who rely on SweetHART’s ADA services for their basic transportation needs.  Our special-needs community made an extraordinary effort to be there in force, underscoring the importance of this service and how hurtful service reductions will be for folks who have few, if any alternatives.  I think the commissioner heard this message, loud and clear.  As I said during the forum, the across-the-board service cuts and fare increases are not set in stone.  They are the governor’s proposal and subject to change by the legislature. Monday’s testimony showed us that that proposal will not fly.”

“I want to thank everyone who came out for the forum. We heard from many people about different facets of transportation from bus fares to tolls,” said Rep. Michael Ferguson. “I have seen ‘NO’ public groundswell in the greater Danbury region for bringing back tolls. Once you unpeel the onion and talk details of tolls, people find out how negatively it will impact their family budgets.”

“We need to be cognizant that many people rely on public bus transportation as their only means of transportation, and without it some could not get to and from work,” said Rep. Will Duff. “I want to thank the riders HARTransit for attending our transportation forum. A 15 percent cut to state subsidies for HARTransit in Danbury proposed for July 1st, by the state DOT, will threaten much needed bus routes and services for disabled people. It is my hope Commissioner Redeker listened to those who spoke and need the bus service.”

“Meetings with the public are critical, because the voices of the people who are most affected by service cuts and fare hikes are the most important voices for us to listen to,” said Rep. Lavielle (R-143).  “I thank everyone who came out to the meeting in Danbury.”

“It is clear the Legislature is not going to allow any of the Governor’s proposed service cuts or fare hikes. Instead we are already working on alternatives such as accelerating the car sales tax receipts to the transportation fund,” said Rep. Fred Wilms.

Sen. McLachlan said, “I hope Commissioner Redeker was listening to all the people who took the time to attend this forum and share the enormous negative impact the administration’s proposals will have on businesses, commuters, and the entire community. The Connecticut economy is suffering from the already high taxes and fees imposed by Governor Malloy’s administration. Reduced schedules, increased fares, tolls, an increase in the gas tax, and all the other ways that have been proposed to suck more money out of taxpayers’ pockets; these will further cripple the economy and drive even more businesses and residents out of state.”

“What we heard tonight makes clear that years of misallocated transportation spending isn’t just something we can shrug our shoulders at,” said Rep. Dunsby (R-135). “The consequences of this are hardworking people losing services they rely on and paying more. If we aren’t going to spend transportation dollars where they are needed, it won’t matter how much money we take in.”

The lawmakers in attendance said they will work together to find bi-partisan solutions to the state’s transportation problems.