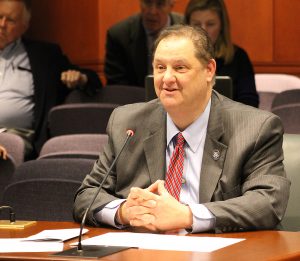 Currently, Law Enforcement Officers (LEOs) in Connecticut may elect to have their voter registration redacted for their own personal privacy and protection. This is especially important if they live in the town they serve but often, they can still be located with the publically-available voter registration data of family members living in the same home. According to Bolinsky, “this simple bill will make it much more difficult to use Voter Registration to match an officer with his surname, affording greater privacy and personal security to participating LEOs and their families, reducing their possible exposure to harassment or targeting.”

Bolinsky concluded by saying, “The peace of mind proposed by this concept has no fiscal impact, yet will serve as a common-sense, cost effective way to provide greater protection to the men and women whose chosen profession is protecting us.”

The bill will be considered by the GAE committee over the coming days, after which Bolinsky is hopeful it will go to the House Floor for further debate and a vote.