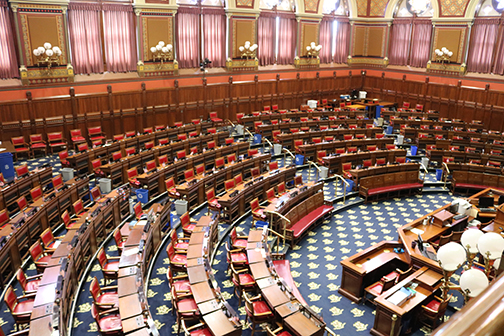 During the 14 hour debate, Republican lawmakers called multiple amendments to implement changes to the bill that would have lessened the blow to local municipalities, non-profit organizations, and individuals in the Intellectually and Developmentally Disabled (IDD) community. Despite their best efforts, Rep. Petit, Betts, Pavalock-D’Amato and their Republican colleagues were unable to prevent the bill from passing forward without having some input into its final language.

All three lawmakers agree on increasing wages and doing what is best for the greater population of hard-working men and women but are worried that if those increases are too severe or too fast, that it could lead to reduced employment opportunities, shorter hours, and closed businesses.

“I, like many of my colleagues believe in fair wages, but I feel any increase to the minimum wage needs to be done so that it make economic sense and is fiscally responsible in a clear cut time of economic contraction,” Rep. Petit said. “After listening to our constituents and several hours of public testimony, our caucus pushed for a longer wage increase implementation, carve outs for those under the age of 18, those working summer jobs, our municipalities, and non-profits. Unfortunately those suggestions weren’t approved. I hope that more compromise can be had when this bill heads to the Senate for their vote.”

“The passage of this bill will have harmful effects on many of our non-profit organizations like the Boys and Girls Club of Bristol, Bristol Adult Resource Center and local businesses like Lake Compounce,” Rep. Betts said. “It will also severely hurt many of our small businesses in Plymouth and Bristol who are currently employing less than fifty people”

“Not everyone has the financial capabilities of Walmart, a large corporation who has the ability to absorb these type of drastic increases,” Rep. Pavalock-D’Amato said. “Our small business owners aren’t guaranteed to have more revenue to cover the costs associated with this bill. As a new mother, the increased costs of childcare also concern me. Democrat lawmakers say they need to increase the minimum wage in order to keep up with the costs of living in Connecticut, but somehow forget that they are the ones responsible for making this state so unaffordable.”

The bill, which was initially discussed during Tuesday’s Appropriations Committee was promised by chairs of the committee to only be a ‘work in progress.’ During the meeting, it was brought to the committee’s attention that Speaker of the House Joe Aresimowicz chose to add the bill to the following day’s House session while the committee was still having discussions on the bill’s language.

Lawmakers from both sides of the aisle began their discussions shortly after 9:00 p.m. Wednesday night and concluded them on Thursday afternoon. When the final vote was taken, the bill passed 85-59 with six absentees. Two Democrats also voted in to opposition the bill.

The bill will now head to the Senate for a vote.