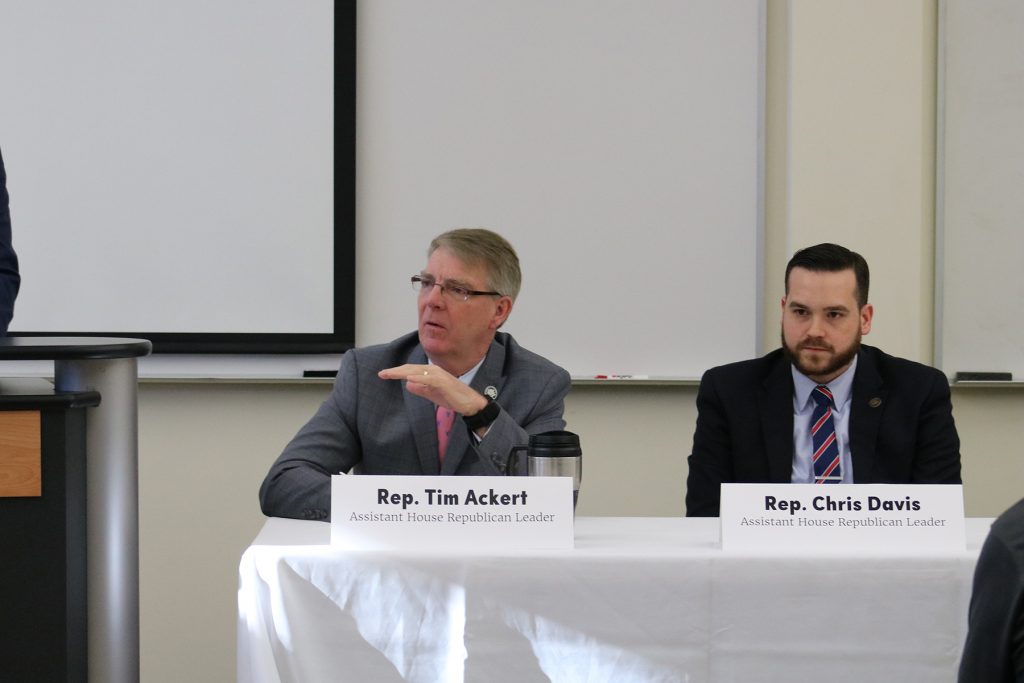 TOLLAND – State Representatives Tim Ackert (R-8) and Christopher Davis (R-57) participated in a panel discussion hosted by the Tolland County Chamber of Commerce co-sponsored by the CBIA held at CNC Software in Tolland.

The panel was moderated by Eric Santini Jr. who began the conversation by discussing Connecticut’s challenging business environment and slow economic recovery.

In his remarks, Rep. Davis, who is Ranking Member of the Finance Committee, focused on the new taxes in Governor Lamont’s proposed budget, “The proposed sales tax expansion to professional services would certainly impact a lot of businesses and self-employed professionals across the state. When combined with all of the other proposed revenue changes, Governor Lamont’s proposed budget includes nearly a billion dollars in new taxes over the next two years with little in spending reductions or structural changes.”

As a small business owner Rep. Ackert addressed concerns about minimum wage increases and workforce development, “Raising the minimum wage too high too quickly would have a negative impact on entry-level employment. A number or small local businesses have shared that they might not be able to retain those workers who are just starting out or they would have to cut back on hours. Serving on the Higher Education and Employment Advancement Committee I think we should focus on training more people for high paying positions in the trades that are open right now.”

Both representatives discussed potential legislation regarding crumbling foundations and noted that the issue isn’t confined to home owners but also impact commercial structures and municipal buildings as well.