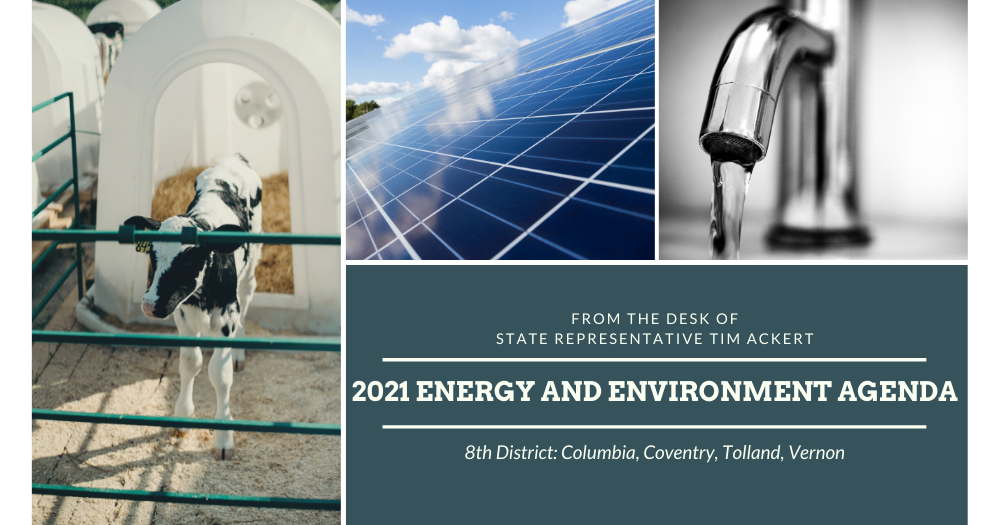 HARTFORD — On Friday, State Representative Tim Ackert (R-8) unveiled a forward-looking energy and environment legislative agenda for the 2021 legislative session. Proposals include addressing well-water contamination, expanding incentives for community solar projects, and streamlining the permitting process for new ‘food-to-power’ facilities in the state. Ackert, who represents the communities of Columbia, Coventry, Tolland, and Vernon, says that while all his proposals come in response to requests from his constituents, they also further his long-standing commitment to all of Connecticut’s communities and ecosystems.

As a member of the legislature’s Rural Caucus, Ackert understands that keeping the state’s roads clear in the winter can have unintended consequences for rural communities in Eastern Connecticut, where private wells are being contaminated by rock salts used on state and local roads. Elevated levels of sodium chloride in well water can corrode a house’s pipes and require immediate repair. “You have a situation where, unless you can afford to spend a lot of money on an expensive filter system, you’re unable to use the water in your tap. If your pipes are corroded, you’re also talking about thousands of dollars in repairs and harmful metals potentially contaminating your tap. It’s a major concern for people in this district,” Ackert said.

Ackert has introduced a proposal to examine less harmful de-icing alternatives to eventually replace rock salt and save affected homeowners money. “This is an area where I don’t think the state is aware of how costly this practice is in terms of the environmental impact. If we can keep our roads clear with less harm to the environment and to homeowners in rural communities, it’s a win-win,” Ackert said.

Ackert also maintained that, as a veteran member of the legislature’s Energy and Technology Committee, one of his top concerns is addressing rising electric costs and delivery rates. He said that the unexpected rate increases of the past summer have pushed more and more Connecticut residents to try and offset their utility costs by installing solar panels.

In addition, groups of homeowners have banded together to invest in community solar installations and take advantage of virtual net metering, where residents share in the benefits of an off-site ‘solar garden’ and receive credits on their monthly energy bills.

Ackert said the current cap on virtual net metering should be raised to incentivize more communities to take advantage of solar technology and reduce their utility costs. “My priority is making it so the benefits of this program can be enjoyed by more towns in our state. Community solar and virtual net metering are just two ways that Connecticut residents can take back their power grid and cut their costs,” Ackert said.

Ackert believes that anaerobic digesters, which produce power by breaking down food scraps and other organic materials, could be one answer to the state’s growing waste problem. According to DEEP, half a million tons of food are thrown away in the state of Connecticut every year and with the planned closure of Hartford’s waste incinerator in 2022, more of that waste might soon be headed for landfills in neighboring states.

However, due to the lengthy process required to get a permit approved by DEEP, only one of the state’s five proposed digesters has been built — at Quantum Biopower in Southington — and only after nearly 26 months.

Ackert believes the state needs to fast track future projects to meet the growing need, and he’s introduced a bill to streamline DEEP’s approval process for new anaerobic digesters to allow farms and other food producers to turn their waste into power.

“In rural towns like Coventry, this technology is something the state should be making more accessible. It’s right in line with the state’s environmental goals and the independent, entrepreneurial spirit of our agriculture sector,” Ackert concluded.

As committees meet to consider these and other legislative proposals, Rep. Ackert encourages his constituents to be on the lookout for updates and sign up for his email newsletter on his website — www.RepAckert.com.